Gadhafi On Display At Shopping Center 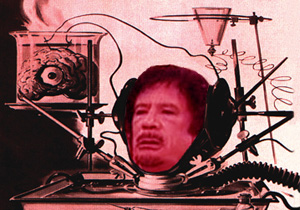 I love the story in the paper about Gadhafi (spellings vary, but out of laziness I'm arbitrarily choosing this one.)

They caught him, tracked him down, sniffed him out, and got him. A gathering of concerned citizens immediately killed and dismembered him, one individual even taking his shoes.

Authorities then moved in and broke up the reverie, then gathered up all the pieces of his body and stitched it all back together so they could give him a proper burial. Or so they thought!

Instead, and this is apparently true, according to an Associated Press article by Kim Gamel and Rami Al-Shaheibi, his blood-streaked body was put on display at a local shopping center. I can picture it perfectly, since of course we also have a shopping center here in town. It'd be like bringing in a corpse and setting it up right between the Mode O'Day and Hallmark stores, sure to gather a crowd!

The AP article says people filed in to take their pictures with Gadhafi's corpse. Some chanted, "We want to see the dog." Great sentiment, perfectly expressed!

This is what I love about foreign countries. They don't mess around with niceties. Like the Ayatollah when he died. The body fell out of the casket a dozen times on the way to the cemetery. Meaning, if he wasn't dead before, he certainly was by the time they got there!

Here in the United States, I don't know what it is. The only ones who get excited at American funerals are the religious zealots out there protesting. And even they aren't dedicated enough to grab the body and put it on display somewhere, like at their church. They ought to. Maybe it'd give the rest of us a taste for excitement.

Gadhafi was a tyrant and criminal, and he got what he deserved. Again, there's a contrast between the way the Libyans do it and the Americans. We've also had tyrants, even war criminals guilty of crimes against humanity, but we let them retire in honor back to their ranches. I can think of a few cretins who'd look pretty spiffy at the shopping center. Prop them up down by the ice cream stand. I could have my picture taken while enjoying one of my favorite desserts. Just desserts for them, just desserts for me!

Good riddance to bad rubbish... And that goes for Gadhafi, too!
Posted by dbkundalini at 5:21 PM