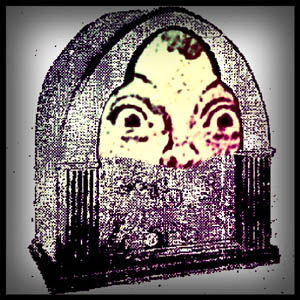 On this day of days, if you're into radio, since it's 10-4, I want to turn to the interesting story of Roger, your typical fourth grade schoolboy, whose experiences, as it turned out, were anything but typical.

His troubles began at recess one day when a swing in motion lurched back and knocked out his front tooth. There was no way to reattach the missing mouth appendage, so the dentist had to replace it with a big shining gold tooth. So far, so good. Except for one thing, from time to time he was picking up radio signals, and if the expertise of radio technicians is to be believed, by some miracle he was also transmitting!

To make a long story as short as possible, since we know our readers can't be bothered to spend more than a few minutes on a backwater site like this, the whole thing of him receiving and transmitting radio signals caused a lot of grief.

One day, a day very much like any other day -- trees were well anchored in the park, deer frolicked in their country solitude, accountants were busy balancing checkbooks, and iTunes came out with another update -- Roger sat down at his desk and prepared to take an exam.

They had a substitute teacher that day who didn't know that Roger was an honest child who would never cheat. At the very same time, there was an unusually high level of airplane traffic in that area. And the atmospheric and solar conditions were just right for the maximum sensitivity regarding his gold tooth and its radiophonic capabilities.

Roger sat taking the test, but was bummed out at the constant chatter in his head, the pilots complaining about engines going out, propellers falling off, and so forth. Finally he had to open his mouth for relief, right when one of the pilots said, "Copy?" and the other said, "Roger." Making it sound to everyone like someone was saying Roger was copying.

The teacher came over and checked out the situation, with Roger protesting, "No, I'm not!" She separated him from the others by a few feet. Pretty soon the whole situation built up in the same way, a passenger in one of the planes had some box cutters and was trying to break into the cockpit. The pilot asked, "Copy?" with the response being, "Roger." Other students were covering their papers, while realizing this was out of character for Roger. The teacher separated him even further, moving him very close to the window.

The trouble on the planes overhead seemed to be reaching a fever pitch. Air marshals were engaged in one "helluva" tussle with the terrorists, there was a lot of confusion on board, and many voices were jamming the radios. No one could seem to get a clear channel, with one air marshal now sitting on a terrorist who was trying to ignite a shoe bomb and underwear bomb both shouting into the set, "Copy?! Copy?! Copy?!" All radio decorum was out the window. The control tower wanting to emphasize their presence shouted back, "Roger! Roger! Roger!"

All eyes turned on Roger, who threw up his hands. "I'm not copying!" Can't you see that?" But the class and the teacher were an uncontrollable mob, moving in on him. Roger moved outside on to the edge of the building, on one of those ledges like you see in old movies, and started shouting, "I'm going to jump if you come at me! And I'll take you all down with me!" He shouted that and many other threats, being extremely desperate. All this was being transmitted over the same signal back to all the planes.

The pilots and air marshals believed the control tower was also taken over by terrorists and all hope was gone. But just to be sure they were crying out things that couldn't be understood, except for "Roger?!" and "Copy!" Over and and over, "Roger, copy! Roger, copy! Roger copy!" With Roger there on the ledge by now thinking God himself had condemned him.

So we have terrorists in the skies, desperate pilots, air marshals who were threatening to take early retirement, the control tower not knowing who was talking, and a little boy on the ledge freaking out, and a substitute teacher and a classroom of irate children lighting torches for the final showdown with innocent Roger.

Roger didn't know what to do! All life was conspiring against him and he did what had to be done, he leaped to his death. From the sky then, three planes were coming in for a crash landing, smacking into the school, destroying the facilities and destroying the teachers and other students. The only thing not burnt up were some desks that were thrown clear of the flames. And those were already so badly marked with graffiti they were barely worth saving.

I said Roger leaped to his death. I'd love to spare him somehow with a happy ending, but once you've leaped to your death, it's too late for that.
Posted by dbkundalini at 9:00 PM