Masturbananda -- The Need For Seed 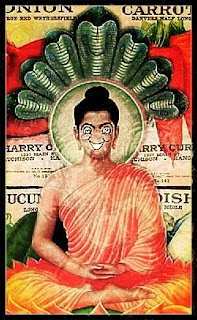 You've got seed and you've got need.

The need is a personal, discernible need, often with personal motives. But the need is also part and parcel of nature's drive, there of course being no clear division between the two needs except what we see as true because of our sense of a personal consciousness.

Where the seed comes from and the compulsion behind it, these things obviously arise from beyond our individual personal consciousness and choice. They are a given in nature to the nature we are. The nature has one path leading toward regular replication. It also takes an evolutionary path, going toward higher expressions of nature. Then, ultimately, there is union with the Divine at the heart of it all. You can probably tell I'm thinking of concepts that come from a mix of Sri Aurobindo and Ken Wilber's teachings, as well as the teachings of Sri Masturbananda.

Of the masters who deal with seed and the various needs of seed, Masturbananda is no doubt the preeminent authority. This is right at the heart of his teachings, and in light of that, we find him to be very practical. Because this is at the center of every man's life. (We're excluding eunuchs and possibly the Pope. Note to women: You're going to have to look elsewhere. We know there is some psycho-physical corollary in your experience, but what it is and how it works is a complete mystery to us. We basically know where the off/on switch is, but how the apparatus behind it should most accurately be described is so far unknown.)

Sri Masturbananda's teaching is in agreement with the mainstream of science as to the properties and "needs" of seed, while going beyond them in terms of the hidden potentialities of the same for man's union with the Divine. He bases his teaching not on speculation or doctrine handed down but on personal experimentation and discovery. And so he passes it on, that his chelas (students) may discover it for themselves. He's not asking them to take anything simply by belief or trust, but calls on them to test the teachings and see.

As I've written before, Masturbananda teaches that real glimpses of the Divine are given to us through our best devotions. And he shows the way. How many times I can remember the Master retiring to one of the ashram's outhouses! Everything is as normal. Then there's an obvious fervency at work and we can tell there is something of greatness in our midst. An intensity that you can just feel is building in the atmosphere.

Suddenly all of your senses hone in on the outhouse! The sounds are greater and greater, even becoming ethereal and less distinguishable as mere sounds and become a feeling, like a shroud of intuition covering you! The eyes behold a glow covering the facility! Everything is working itself up in a wild crescendo. And then, we duck for the cover, the roof is blown clean off, and a jet stream of the purest light arises from the earth and meets another beam coming from somewhere beyond!

That's leadership. That's showing the way. I say it like that because the Master is always in unity with the Divine; he doesn't need to do this, but he takes part in the grosser forms of devotion to be our example. And you got to love him for it! It certainly inspires us, and how much greater then is our own fervency upon retiring to our chambers in the light of the Master's blessed condescension. The big difference, of course, is that none of us has yet caused real roof damage; perhaps some ceiling spotting, some of the bigger guys, but that's about it.

The more I concentrate on his blessed teaching, the more inspired I am, and that's the way it is for all of us. Because this isn't just something that arises from us, but is part of the Divine plan. Once you see it, you can't see it any other way. These potentialities are with us, but clearly they are from beyond us, speaking from an egoic perspective. That the Divine wills for union with us, and finds equal or exceeding joy in that, is all the added inspiration we need to be faithful to our devotions!
Posted by dbkundalini at 10:38 AM