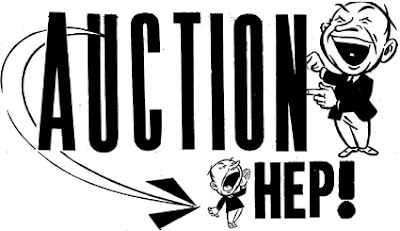 It's been forever since I've been to an auction. I just feel like I don't need more stuff and somehow I've had the discipline to stick to it. But a decent auction sale can be fun, if you got all the time in the world and don't mind waiting till they come to what you want.

The best fun I've had at auctions was when I was a kid. We used to go to sales on people's farms, and back then kids had the run of the place. We'd be climbing in the barns, swinging from the rafters, getting stuck down in the cracks and crevices of the hay in the mow, etc. If only the adults back then knew! But, as an aside, back then no one cared about liability issues all that much; this was before lawyers could advertise on TV.

We had some favorite auctioneers back then from here in town. I think the son is still alive, at least last time I heard. Although he'd be probably 75 or 80 now, the son and his old dad, once the auctioneer of the family till the son took that spot. You probably know where that put the dad; he became the HEP guy; I frankly don't know if the son was the HEP guy when he was a kid, but probably. We loved these guys.

I even have some auctioneer semi-shirttail relation, and one guy I've known around 50 years whom we used to go to church with. I still see him once in a while. He had cancer in 2001, the same time as my dad. They even sat in easy chairs next to each other getting chemo. But whereas it killed Dad -- they were about the same age -- this other guy is still going strong. And doing his auctions. I went to one of his auctions where it was the place next door to his home! They sold beefburgers right out of their own garage, which doesn't happen often.

His HEP guy -- I think he was a guy I also knew, but can't remember. I do know that there's my semi-shirttail relation who's an auctioneer, and it really could've been him, the HEP guy for him that day. I think they get together, being old church relation also, and help each other out as much as they can. Different, no doubt, from the HEP guys in the big city, although I'm sure they get that HEP guy jive going no matter who they are and who the auctioneer is.

I suppose I ought to clear up the terminology. I don't know if they call them HEP guys where you are. The HEP guy is the head second banana to the main auctioneer, who's in charge of scanning the crowd for bidders. When he sees one, when he sees action, he yells "HEP!", being a slurred way of saying "YES!" or "YEP!" You can also hear them say "HUP!," "YUP!," and other variations, depending on how carried away they get.

What I prefer seeing, and there's no guarantee you're going to see it, is an auctioneer who's shorter and maybe squat, and a HEP guy who's taller, maybe a beanpole. His skinniness and being crazy gangly makes for some comedic stretching, pointing, peering over folks, and looking down on the auctioneer. Who, being the boss, looks up and gives the HEP guy faux dirty looks and just generally questions his abilities as a man. Wow, this is taking me back, the delights of seeing these guys chiding one another.

I remember this one HEP guy. He had a real lazy character, like he almost couldn't be bothered to sell the item. "This is a TV, we think it works. It worked last time they watched it," leading to the auctioneer rolling his eyes and looking disgusted. "It worked last time they watched it," he repeats, like Ollie Hardy, before getting the first dollar bid, at which point the skinny HEP guy really comes to life and starts working the crowd.

Auctioneers always look for a bid about $10 more than the first bid's likely to be. The HEP guy stands there moving his fingers back and forth, soliciting. But they often have to work it down to a dollar, which isn't always that exciting. This one auctioneer was trying to get a decent opening bid on a desk, but just couldn't, leading him to complain, plaintively, "What's wrong with my little desk?" I about cried. The HEP guy looked hangdog too and moved his hands, and I believe they eventually sold that little desk for $25, a decent price. "HEP! HEP! HEP!"

What I'd really like to see, and frankly never have seen, is a HEP guy with an inferiority complex. Like "Always a bridesmaid, never a bride," that kind of "Whoa is me" defeatist attitude. Maybe he comes to the sale a little tipsy, always wishing he might-ever could've moved his lips like the auctioneer, but nothing's ever good enough. Always the second banana. Then he acts out and finally chews out the auctioneer for having the plum job while "Here I stand, forever the HEP guy, always the HEP guy..." Always with the ambition, but always losing out to this, that, and the other auctioneers.

I've been to lots of auctions, but I've never seen one spoiled like that by drama. Incredible discipline.
Posted by dbkundalini at 3:00 PM