The Guy Made That Piano Sing! 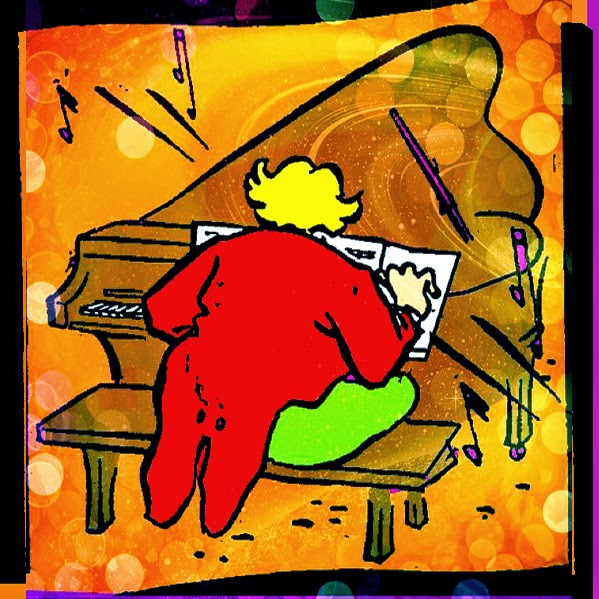 It was a wild time in church today. All kinds of wildness. Thanks to the substitute piano player. Where we got him, I don't know, maybe Borneo. He had me rockin' out. It was a great time!

The thing about this Borneo guy was this: He was bouncing on the seat and playing the piano so hard, so feverishly hard, that it was literally moving around the room, even with such force as to push chairs and the people on them out of the way. He blazed a path right through the midsection, turned and bowled over the first couple rows, and toppled the pulpit. The pastor in a robe of black was white as a sheet.

It's hard to believe, I know, but every word of this is true. If you can picture in your mind's eye a guy, the combination of Jo Ann Castle, Big Tiny Little, Jerry Lee Lewis, and Fats Waller, with the hair of Doc Brown, and completely full of the Holy Ghost, you'll have a great idea of what this guy was like. He took off on his instrument, and I gotta tell you, I was wide awake! He made it sing!

And this was from the very first song, an instrumental for gathering, "Jesus, Love of My Soul / Like a River Glorious." We needed a mosh pit! I caught it out of the corner of my eye, the piano in quick motion; that's when I looked up and paid attention. He was making definite, ever greater, movement from the piano's usual spot! The first thing that popped in my mind -- the very first thing -- was Putin gobbling up territory. You don't expect it, then wham, you've lost Alaska.

He ran over a couple older ladies' feet, who simply out of an old sense of propriety stifled a cry of bloody murder. The fierce look of great pain on their faces was a genuine expression of something primal, great pain. I had to wince, then quickly turned my attention back to Borneo's thrilling performance. The pounding of his hands was crazy, his fingers a blur, with even some blood. As the instrument came closer, I was shocked to see keys from the edges coming loose and flying through the air.

Much later, at the close of the service, I heard that one guy's hearing aid had blown up, apparently doing him a lot of harm when it comes to ears. He was staggering around, clutching the air. More evident in real time were the organ pipes on the wall toppling over from the pounding vibrations. I recalled Jericho, whose walls were breached by a series of trumpets, when all they needed was a rampaging pianist.

One totally strange moment came when the floor opened up and swallowed three or four of the church's worst heretics, proponents of the so-called New Thought. Since there's no basement, it's anyone's guess where they ended up. Wherever, no doubt it's giving them something new to think about. I was happy to escape, having been to only one of their New Thought meetings. Looked like I shunned them in the nick of time.

The minister threw up his hands and made a throat-cutting gesture to the sound guy, who threw up his hands in despair. He cut the mics but the piano itself, with Borneo's jackhammer fingers, was its own source of power. I noticed terrific phenomena in the light fixtures above as they swayed back and forth. They alternated bright and dark, like angelic visitations, then demonic irruptions. Which once you've had troubles with, I can personally attest, everything in life's harder to deal with.

Anyway, so much of the stuff of the sanctuary was totally demolished, there's no telling what'll happen next week. Certainly the usual pianist will be there, but whether there's anything left for her to play, that's another matter. The church wasn't doing that great on money as it was; now what we'll do is hard to predict. I see a sausage and pancake supper in our future.

I'll tell you what I'd love to see, and we could make some money on the beer. I'd love to get Borneo back, and make him wear gloves, and everyone hook arms together while singing "Blessed Be the Name of the Lord," with everyone sloshing beer steins in time. We did that at youth camp once and it was a lot of fun.
Posted by dbkundalini at 3:15 PM