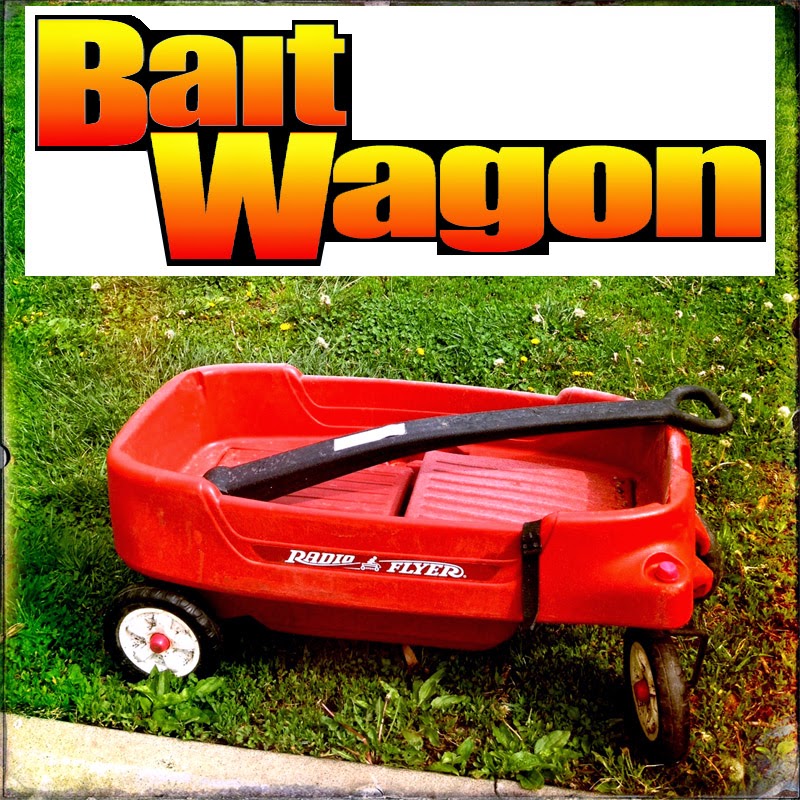 NOTE: If you're a fan of the TruTV show "Bait Car," you'll like this. If you don't know the show, it features metro police luring people into stealing cars. The objective is to prevent car theft. It makes a certain amount of sense, if you cross your eyes and think about it really hard. You know they're going to steal it, the police are rooting for success, and finally ... "There they go! Shut it down!" ... They shut the car off by remote control and arrest the perps.

There's been a rash of wagon thefts recently in my town. It used to be you could take your kid to the park, take them to the restroom, and come back out to your wagon still there. Those days seem long gone, with the many crimes leading to parents being extremely mad, and kids upset they took so long in the bathroom.

It's been crazy. Everyone knows a kid who's lost a wagon, and everyone knows a parent who's mad at life-in-general and everyone in it. Gun sales are way up, as well as heavy artillery, mortars, bombs, and jet fighters. The biggest course at adult education is on assembling IEDs. Folks have even shown up at the police department threatening officers with death if they didn't put a stop to the thefts. And, as it turns out, they meant business.

That's where I come in. I've been working with the police, part-time, training officers in public relations, using some of the principles of group dynamics as well as other people skills. One day, I was just wrapping up a session on "You Need to Go Along to Get Along" -- on knowing when the passive side of passive-aggressiveness is indicated -- right when a parental militia burst in and took out two of our best men. When the excitement died down, I concluded, "This time aggression was indicated, but don't worry, you'll get the hang of it."

Another principle we're working on is "Digging Down to the Root of Any Dilemma." "Why treat the symptoms if the cancer's still there?" I asked rhetorically. "These senseless police killings won't stop till we address the real problem, the theft of these dam-- darned wagons." That's when I came up with the Bait Wagon program, modeled on the TV show. We would trick out normal wagons, pimp 'em up real "bad", so "bad" no self-respecting wagon thief could resist. Then put them in parks ... and wait.

But on our way with the very first wagon, we found ourselves fighting an entirely different parental militia, these ones coming in from the air. One officer -- Sgt. Smith -- said, "I've heard of helicopter parents, but this is ridiculous!" Those were his last words, as a mortar sped through the car window and impaled him. I helped the others drag the Bait Wagon to safety just as the car blew into a million pieces.

Fortunately, the park was near. With a wary eye, we quickly set up the Bait Wagon, leaving the handle right in plain sight, then hid in the bushes. It didn't take long till we had lots of browsers, lots of interest, little kids, parents, and a few juvies -- kids with tattoos. By now we were silently praying, moving our lips, "Somebody, please, take it for a spin!" At last a couple of good-time "bruthas" milled around it a bit too much, dicking with the handle and looking around. I checked the laminated profile guide Sgt. Smith bequeathed to Lt. Rutger and found them ... looking pretty close to these actual guys!

Almost immediately, true to form, the "bruthas" attached the handle to the mainframe and took off running down the hill, predictably picking up speed as they went. Likewise, we sped out from the bush. But our timing was unfortunate, as a parental militia just then came into sight on our rear flank and took position. We took incoming, with their first lucky shot taking off Rutger's leg, and the second the rest of him. I wasn't completely spared; shrapnel nicked the leather on one of my shoes, but it was on the back where it's not as noticeable.

But first things first! The "bruthas" were getting away with the Bait Wagon! I gave the order to the others: "Pull out!" (I actually didn't have any authority, but this is an old group dynamics trick I teach at my seminars: Anyone who "takes charge" is at least temporarily respected till folks have time to think it over. Most assume you know what you're doing.)

Now, each Bait Wagon is equipped with a remote-controlled brake to lock both back wheels tight. I ran back to Lt. Rutger and snatched the controls from his holster. Then we approached the befuddled "bruthas" -- now on the sidewalk, almost to the grocery store, struggling to make the wagon go. I gave the order and we rushed in from three directions, which would've been four had we avoided that last casualty.

Anyway, it turned out these were the guys behind all the recent wagon thefts. We think. We never actually found all the wagons, and they didn't have time to confess. But, you know, the laminated profile sheet and all ... it stands to reason. "Bruthas." It's a human tragedy.

But the real tragedy in this whole stinking affair was our failure to get this news out to the parents in time. All of a sudden, three jets came over the horizon in formation, strafing the whole scene for miles around, killing not only the remaining officers, but the "bruthas," and quite a number of innocent bystanders, including a white guy unrelated to this case running by with a different hot wagon. As for me, I barely managed to survive, not being hit but halfway scared out of my everlovin' wits.

Having nothing more to do -- my job was done -- I continued on to the grocery store, filled the wagon with a few essentials and went home. Saved a little gas -- did my best to save the planet -- and got in some exercise.
Posted by dbkundalini at 2:44 PM