Hellbent for Leather or Swaying toward Lavender 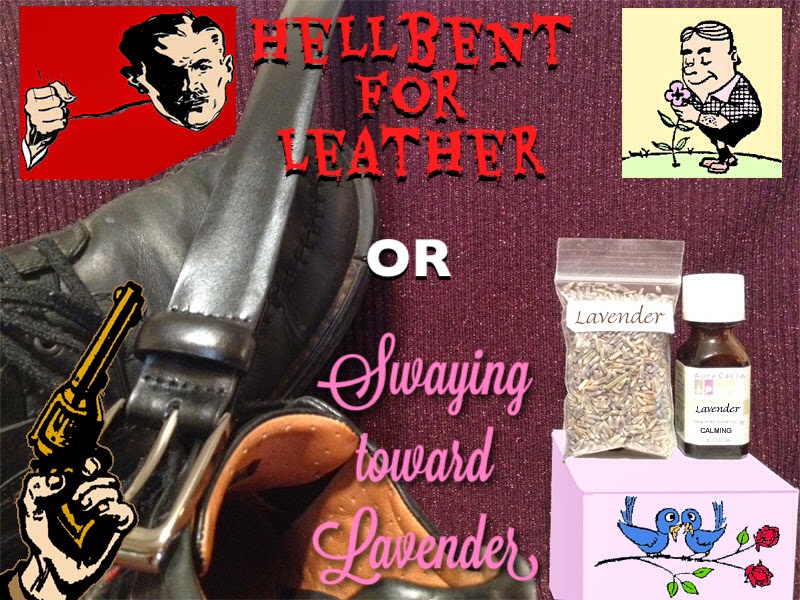 I've never been an absolutist, that you have to be either Hellbent for Leather or Swaying toward Lavender exclusively. I hear some of them saying that and I just have to laugh. Instead, my conviction has always been, sometimes you may be one, sometimes the other, and sometimes, although it's rarer, you can be both at the same time!

In my defense, I've always been that way no matter what method you use to describe personality types, and I'm not likely to change now. I just happen to think folks are more well-rounded (or varying) than many of us can believe. Although, as you might expect, it's those who are predominantly Hellbent for Leather who tend to keep the more absolutist points of view. Leaving us predominantly Swaying toward Lavender types as the ones holding up the banner of "To Each His Own ... Depending."

How do I feel about the absolutist types? In my more Swaying toward Lavender moods, naturally I completely understand. But in my more Hellbent for Leather moods, I'd frankly like to take a leather strap to their hide and beat them to a bloody pulp, or to a better understanding, whichever comes first. Lest anyone be concerned by my statement, know this, my Swaying toward Lavender nature keeps me from acting on it. Unlike the definite Hellbent for Leather types, who frequently lack all restraint. The prisons are full of them.

Please, though, I don't want you feeling sorry for me. Because I had only two parents and a happy home. There's lots of people who don't share my good fortune. And unless they've managed some real personal diligence -- and this advantage is obviously more for the Hellbent for Leathers -- they can be so overcome it's ridiculous. That's the tragic side of Swaying toward Lavender; it can so easily get out of whack.

Let's say they have a father out of the home, an ex-stepfather and a current stepfather. And let's say the fathers were, respectively, strong-STL, strong-HFL, and strong-STL. That's a bad combination but all too common. In her shopping for men, Mom needed to find a moderate-STL or moderate-HFL for her last hookup. But sometimes, when lust is at its hottest, she won't be thinking clearly, particularly if she's reacting to one of the first two men; so instead of splitting the difference (picking a moderate) she foolishly doubles down on one extreme. At which point it's too late.

It's the kids I feel sorry for, not the mom. As for her, my Swaying toward Lavender nature says, "Fine, live and let live," if it's not someone I have to intervene for, like a relative. As long as it's someone out there, someone I don't have to help, someone who has to stew in her own juices and suffer on her own, anonymous to me personally, even if she ends up a total wreck on the human highway, then I reiterate, "Fine, live and let live." But I can see myself really heating up if it's someone I might have to rescue. I can see myself getting very hot under the collar, my muscles suddenly bulging out, then I Leather Out, and preemptively intervene even to the point of force. That's Grandpa and Dad in me -- the killer trump being Dad's little 2 -- Grandma and Mom remain in complete occlusion till they cycle back around.

But all that's hypothetical today! Today, friends, I'm happy as can be. I'm writing this, I'm almost done. Then I'm off to meet friends uptown -- all Swaying toward Lavenders -- where we're going to celebrate together, it being Crouton Appreciation Day.
Posted by dbkundalini at 3:11 PM