How Are Things in the Ukraine? 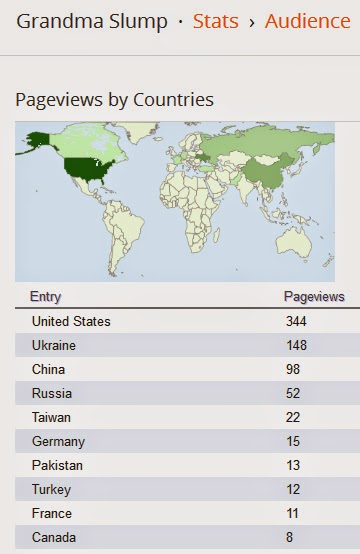 Pictured above is one of the very helpful reports my blog receives from my exclusive partnership with Google. It shows my pageviews by country. I'm not going to say if it's daily, weekly, yearly, or all time. But it's one of those.

I happen to be in the United States, so of course I'm heartened that most of my pageviews are from home. This is the audience I frankly prefer, since most of them know English and are not located so far away as to be mucho foreign. As an aside, I'd like there to be a few United Kingdom visitors for the same reason, instead of all these other screwball places. But you know what they say about begging and choosing.

Still, look at what I'm dealing with! Canada, a measly 8? I can see France coming in at 11; I never speak Canadian, but once in a while I use French, like raison d'etre and savoir faire, so they like to see that. Turkey, I don't get, probably something to do with my Thanksgiving posts. Then there's the complete inscrutability of the others, excluding Germany, since I do on occasion say something about the war. Then Taiwan! Russia! China! Give me a break. All that's crazy, but the very craziest is Ukraine coming in just after the United States! It's the rabbit and hare all over; if America slept a mere 20 minutes, Ukraine would pass us and win!

My actual theory on what's going on sounds very dark, I know, even conspiratorial, but I'm going to say it anyway. Who's more into hacking, gambling, the black market, the sale of body parts, bootlegging, illicit drugs, and dropping out in the 8th grade than these countries? Over there, if you live to be 5 you've beaten the odds. So they're doing something with otherwise neglected websites like mine. Let's say it's like this: I have zero contact with any of them, making my blog the perfect decider for bets. They could look up a post, deciding that X number of characters from a particular line settles something. Web blackjack, roulette, vault combinations, longitudes and latitudes for mumble-peg tournaments, etc.

Going through the possibilities, I'm halfway afraid to ever quit writing. They might set my house on fire. And with global warming and a foolish thatch roof, that's nothing to joke about. I sometimes don't blog for a week at a time, then I get nervous I'm going to see a foreign head pop up on my screen making threats in a tongue I don't understand ... But I would understand the finger cocked like a gun. ... It's scary, the freaking Ukraine!?

If any Ukraine-ites do contact me, I'll try my best to mollify them, such as expressing solidarity with them against Putin, if that's how they swing. Solidarity with Putin if otherwise. Maybe they'll comment on my blog what they might otherwise tweet if Twitter goes down and they need a functioning outlet. For example, I'll say, "Ukraine, how are things?" They'll say, "Could be better," "There's shortages," or, "Tell your NRA patriots, send ammo."

That's important stuff, making it critical -- essential -- that I keep posting. I'm sure one of them is thinking right now, "There are shortages. For example, Putin has a short fuse, and who knows what else? He's willing to show his upper half, why not the lower?"

I'd absolutely love to get a tribute like so: "We need more Grandma Slump posts. It's the only thing that gets us through these tough nights. What with the Army rock 'n' rolling all night and partying every day." That's vivid, a slice of life under siege, and a decent compliment for me.
Posted by dbkundalini at 10:27 AM