Even the Police Can't Take My Walk Away 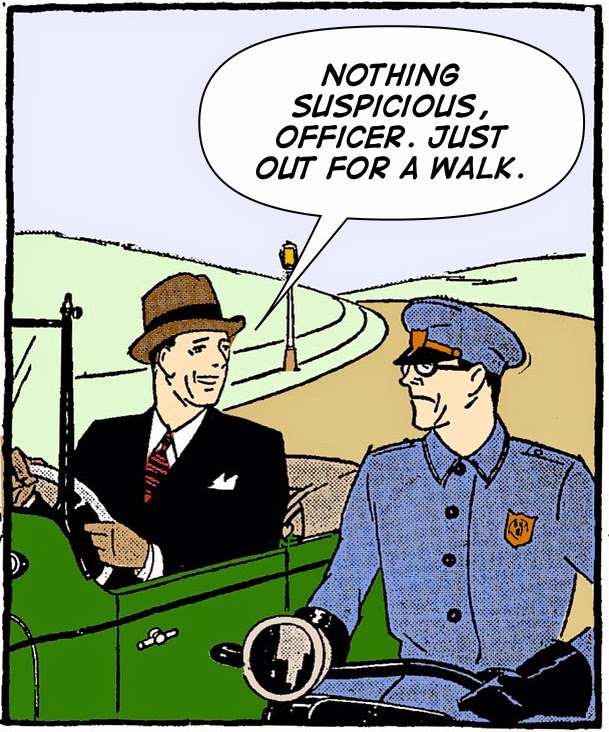 What a great day! Finally, I didn't put it off any longer, I took a serious walk. All of a sudden I've been having this weird pain in my knees, and I'm thinking, Oh no! because I've known plenty of people who've had knee replacements. I've been sitting a lot and not walking, and now I know, I have to get out there now ... not later. The whole theme of my walk today was "Use It or Lose It."

Like I said, it was a very serious walk. Serious time, serious distance. I was watching my step, even meditating, and I truly was as focused as I've ever been. My earbuds and iPod were in my pocket the whole time, turned off. Instead, I listened to the birds, watched butterflies, checked out the various rocks, tree roots, and other things down at the lake. I vow, this was the first of many walks to come! In fact yesterday was a prologue to it, as I walked downtown, then around the square a few times and up and down a few alleys.

This morning, in the happiness of the whole thing, walking along joyously, I kept thinking, "No one can take this away from me!" Not the weather, even if it turns off bad afterwards; the weather can't take it away. Nothing can. Then I thought, even the police can't take it away! The police. They could come in right now and arrest me for something -- some trumped up charge -- but they can't take away my walk! Isn't that great...

It'd be interesting, though, to have the police try to take my walk away. They're like all up in my face, "You didn't take a walk at all, least of all a power walk, as we heard one other guy call his." Then I'm like, "I didn't call it a power walk." "No, but you implied that's what it was. Just like the other guy did." At this point, as you can see, they're trying to egg me into an argument -- Are they lying? Was there another guy? -- then they slam me against a tree, hoping I'll erupt violently.

But the thing about police, as I know better than anyone, being the King of Group Dynamics, is you can easily finesse them. Because something a lot of people don't know is that the police are totally swayed by body language. In fact, they're trained to key in on only a minimum number of cues. (Full disclosure: Because of my reputation in the field of group dynamics, I once served on a police commission.)

The face shows emotions. Do not sneer, control your face in every way. Lips not completely closed, but don't show teeth. Eyebrows relaxed. Nostrils still; if your nostrils flare out because of a bullheaded nature, you can kiss it goodbye. If I were stopped by the police, I'd simply center myself on the thought of watching my aged grandma opening a can of apricots. With that, my face would never go wrong.

The hands show intent. Hands can strangle, reach for weapons, grab at you, throw things, etc. But even if you don't do any of that in the presence of police, you're not home free. Don't clench them, don't hide them, keep them out front, or, better, to the side, lightly open and loose. Remember, rubbing your hands appears vulnerable but instead indicates guilt. You may, however, touch your hands, such as the fingers of your hands touching each other, in a half-praying-hands pose. Do not -- I repeat -- Do not go full praying hands! They take that two ways: 1) The prayer of the guilty; or, 2) A prelude to karate.

Anyway, just some free advice if you're ever out on a walk and the police try to take it away. The fact is, and I say this with certainty, the police are smart enough to know they can't really take your walk away. Think of it, what is a walk but an activity? It's not a tangible thing to be transferred. But you could get a stupid rookie -- Johnny Law with a hot head, who wants you to know he's boss. He's real stupid and even if he can't actually dispossess you of your walk, he might pressure you to deny it, denounce it, or otherwise give up your claim to it.

One other pointer in addition to watching your face and hands: If you get Johnny Law, play along, "Yes sir; No sir; Oh, I didn't know that, sir; That's sure a shiny badge you've got, sir; Is that car hard to drive, sir?; How many times do you rough up people in a day, sir?" Hear all that? As far as he's concerned, you're just an innocent, easily impressed rube, and he's bound to let you go. Then all the way home, you're savoring the whole thing, the walk you still have, and the fact that he thinks he got the best of you, while all along you played him like a cheap fiddle.
Posted by dbkundalini at 3:10 PM