This Putin Thing Is Good News After All 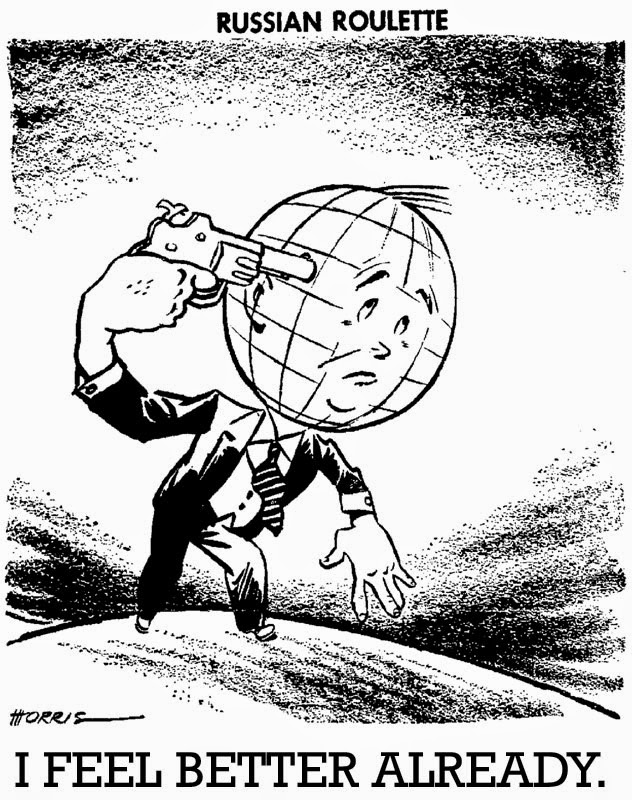 I know everyone's up in arms about Putin invading the Crimea, then next, perhaps, Ukraine, and then the vorld! I am, too, since it's always been my belief that a guy ought to live a humble, peaceable life, for the greatest personal happiness and also for the good of the community. On this point, apparently I and the ex-KGB agent, for unknown reasons, disagree.

I actually sensed all along that the guy was bad news. There was his background, right away a red flag, so to speak. Then there was all that business of him having the actual control of the country even after they had elected a president. Then the macho pose he was striking for the last several years, killing bars with his bare hands like Daniel Boone, and shirtless to boot.

And when you get me going on this stuff -- stuff I'd much rather ignore -- it can be very unsettling. Because, being an old guy, I have clear memories of the old Soviet Union and the way they haunted my childhood. There was always talk of us being blown off the map, etc., which never happened, as it turns out, but as a child I didn't know it'd have a happy ending. I was also a child in Sunday School every week, so I went to bed each night with two terrors: a literal Hell and a literal Soviet Union. They vied for which might be worse. It wasn't till I was an adult that I realized they were people very much like us and not big raving monsters. And that was just Hell. As for the Soviets, the thought of Brezhnev's ugly blockhead and shadowy features still creeps me out.

Now, looking back over all that, except for my grief and that of millions of other kids, the key thing is it did have a happy ending. Despite Ronald Reagan's best efforts to keep the grief going, the Soviets finally crumbled on their own. And we thought we were home free.

Now all our enemies would be pipsqueaks we could swat like flies, our industrial might would transition to fulfill domestic and global peacetime plenty, and we would be free of Republican warmongering. Instead, we got brazen terrorism on the home front, industrialism shipped abroad, and Republicans up the ass, not only with warmongering but every other evil. This is not the world I signed up for when Gorbachev and Yeltsin were doing the right thing by committing national suicide.

So Putin's forays, gobbling up his neighbors and making feints at a larger global hegemony, might be good news after all. If it means we become more insular, nationally and industrially, we can have jobs and a better standard of living. If we're focused again on mutually assured destruction, hallelujah, because we know it's only a fiction. (And if it turns out not to be, at least we'll die heroically, not with a whimper as it'll be with global warming.) Speaking of global warming, troubles with the Russians is something the Republicans won't deny, so we'll be in it together. We can heal our divided nation, bringing reasonable people and these others, the crazies, back together.

I honestly think the best thing after this would be to give up the Internet to hackers, then at the height of their reverie, destroy the whole thing. Again, as counter-intuitive as it may sound, insularity and the fever of fearful nationalism is our only hope. And without computers and the Internet, we'll have an even better jobs outlook. Phone operators will be back, we'll be building filing cabinets once again, and getting to know our neighbors in a friendly way over coffee, not berating them in anonymous chat rooms and shocking them in endless sexting sessions.

Viva le Putin!
Posted by dbkundalini at 6:51 AM