What If I Had to Save the Kitesurfer? 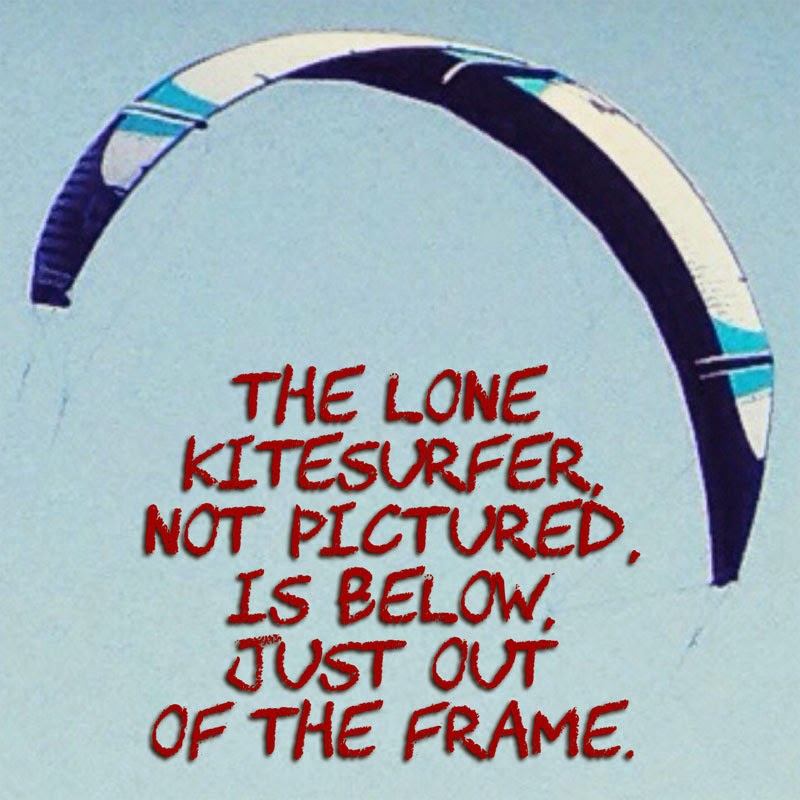 The other day in my endless peregrinations in life, a fifty cent word meaning travels, I found myself down at the lake. I had a full tank of gas, so I threw caution to the wind.

Speaking of wind, it was the windiest day the world has ever seen. At least where I was. I'm actually convinced that I was somehow led to the headwaters of wind, the treasury of wind not yet released.

But I wasn't the only one. There was another. A mysterious figure, whom, as far as I knew, was an immortal, possibly the overseer of the treasury, out testing his wares. I crouched behind a bush, although no doubt he saw me on one of his bold flights.

His method of flight, however, was one of worldly origins -- kitesurfing -- so I was able to relax on that account and return to my fully-exposed car. His truck was just up the hill a piece.

There I was, then, completely free to watch this fabulous spectacle, the daring young man on the flying board and kite. I was this close to losing myself in wonder, when -- in my mentality I quickly crashed to earth. I thought, trying to hide the resentment with a false smile: "He's so fit, so athletic, so carefree, at such peace and oneness with his equipment and the elements. And so strong in the arms -- a strength I've never known -- to withstand 45 mph winds driving and pulling him. Awesome! He flies like a bird, probably 40 feet in the air and sees the kite drop toward the water. What masterful coordination not to fall flat on his----- face, while pulling it to bring the kite above himself once again! A young man marvelous in every way! And solitary, with confidence that he can do anything and remain safe. Probably.

"Then here I sit, weak in the arms, a pain in my legs, a touch of despondency, and afraid of my own shadow. Hell," I thought, "When have I ever done anything? I used to go sledding, which was how to broke my arm. I also broke my leg in a teeter-totter incident. It's been all downhill since then. I might yet take up knitting -- these days the old gender standards are relaxed, especially as more and more men like me look for tried and true activities that won't overtax their failing bodies. Plus, the newer plastic knitting needles are invaluable for safety, I hear."

My self-pitying reverie was broken as the kitesurfer flew over my car, then cut an amazing turn and back-flip to return to the lake. The Wright brothers could've used him!

My reverie picked up again about that time. I started worrying, "He's out here by himself. Not another person in the area but me. What if he has trouble and needs rescued? If he's out there 100 feet, with these waves to boot, I wouldn't be able to swim that far. I tried one of those 12 foot endless wave pools and about drowned." I saw enough -- and definitely worried enough -- so I left.
Posted by dbkundalini at 8:30 AM