The Prisoner Who Learned Bad Vocabulary 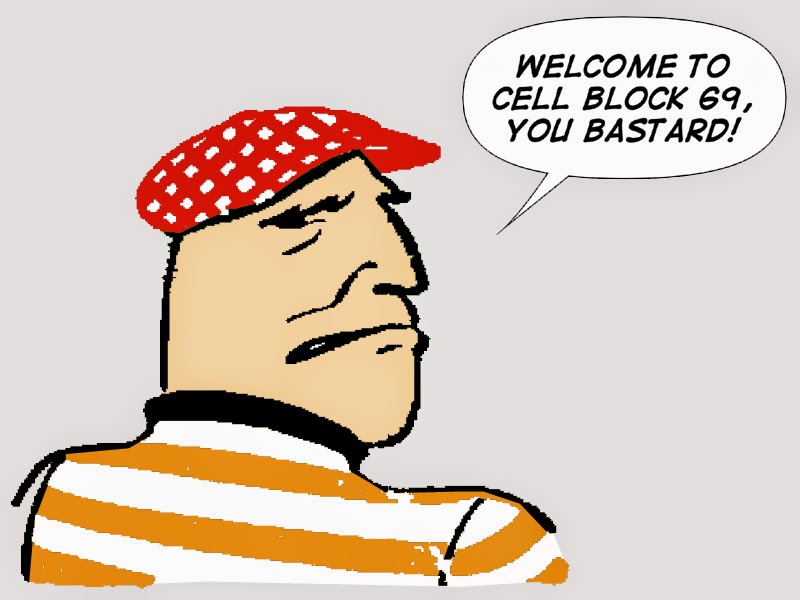 I think having a good vocabulary is very important. That's the way I was brought up. So it shocks me to hear people cussing a blue streak. It was just in the news today, some lady calling another lady a bitch.* How terrible! I'd never vote for her, not just for that, but because she's a Republican. Much worse.

Anyway, to me good vocabulary is essential, making me different, overall, from most criminal types.

OK, there was this one criminal, who was pretty well governed when it came to good language. He hadn't forgotten what his Mother taught him, that you're known by your character. He kept her teaching as it concerned vocabulary, although he didn't keep it when it came to crime. His argument was crime was what he did to keep his mouth well-fed, then a well-fed mouth can keep itself in check.

But, even though crime sometimes pays for a while, keeping your mouth well-fed, in the end, many times, maybe 7 out of 10 times, it ultimately doesn't pay. And even if you get away with every crime in your life you've left behind so much damage for others that overall it doesn't really pay.

Long story short, he was guilty and went to prison. It was one of those deals where you're in there for three consecutive life sentences. A very optimistic outlook, I admit, except it turns out to be nothing but a legal fiction.

There in prison, this guy, who for the shame of it shall remain nameless, met every species of lowlife and scum that the human experience has engendered. Big burly hairy guys with a lower jaw coming up like a bulldog. Skinny guys with that creepy paranoid, schizo look. Even basically nice guys who can suddenly turn evil and knife you. There were others, what you might call sexual animals, always on the prowl, be it the prison library or even the chapel. It's the kind of life that toughens you up, no matter your background.

Right there, if we go no farther, I am personally scared straight. I mean, sexual animals, give me a break! Regardless of him being scared straight or not, however, there he was for three consecutive life sentences, a very long time no matter how legally fictional it is.

The pattern, then, as I understand it, is that a tough crowd does tough things, extending of course to vocabulary. His went to pot. All the usual stuff that we've all heard, and some have perhaps said. "Shit, fuck, goddammit, you cockbite, bastard, turd," etc. That's what he fell into, and I'm sure it only got worse from then on out, with three consecutive life sentences (a lot of time) to perfect his delivery and even intensify the negative feelings behind the words.

It's sad -- to me it's sad -- what crime can do. Not only to society, but to the life of a person -- whether it's three consecutive life sentences or only one. You don't say something like this very often, but fortunately his mother was dead. She never had to know all the crap he did, let alone what it did to his vocabulary.