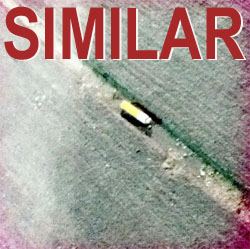 It seems like we ought to be solving some of these cases. I thought forensics could do wonders. Apparently they're not as good as I thought! Sure, these are cold cases, and fairly trivial, but you answer me, If you can't solve the trivial stuff, what kind of confidence should I have that you can crack the tough stuff? Qualitatively, there's no difference in gathering clues and coming to conclusions, trivial or not.

Whether a case is ever solved is going to depend on a lot of things. Including lucky breaks. But we can't leave out taking a serious attitude toward it, and that includes getting to it while the clues might still exist. Not to mention living witnesses. If what they say about the human mind never forgetting any experience, then it's really never too late as long as they're alive.

I was walking along the other day and saw a cigarette smoldering on the sidewalk. That's a picture of it. Innocent enough, right? I don't think so. This is an offense against the law, plus it has to do with fire safety, and the fact that children below the legal age for smoking might pick it up and take a few puffs. I might say, there's no telling how long it was there before I took the picture. For all we know, the perp might've lit it and immediately thrown it down, making it a full cigarette. Very dangerous.

But the cold case I'm thinking of today goes way back. Seeing the cigarette pictured reminded me of something from my childhood, and this would be from around 1965-66. Let's just say 1965, because it was either '65 or 66, somewhere in there. I was walking along and saw a cigarette smoldering on the sidewalk, deja vu! Someone walking barefoot might have stepped on it and gotten a serious burn. An animal, maybe a pet, might've sniffed at it and burnt its nose. Or a child might've smoked it and gotten that brain rush you get when you first start smoking. I remember clearly I walked way around it, afraid to get even a hint of the smell on me lest my mother be suspicious.

To me, it's not just irresponsible to throw a lit cigarette on the sidewalk, it's criminal, as stated above. At the very least, it's littering! But of course it's so much more. It shouldn't be done.

OK, the cold case is this, to find out who threw the lit cigarette on the sidewalk back in '65 or '66. As cold cases, the trail might be completely dead. I'm not disputing that possibility. But what if there is even one living witness? If it's true we never forget anything, perhaps a simple question might bring forth the pertinent answer. Or, if we were to put the entire town, everyone alive in the mid-'60s under hypnosis, maybe that would be the path to the truth. Who knows, we might even get the very guy who did it!

Here's the facts as I remember them. I was in the little town of Ted, Iowa, visiting my aunt's family. I and one of my cousins were walking up Main Street. We had just come out of the town locker, having purchased some bubblegum. We went maybe 8-10 steps toward the north and there it was, a smoldering cigarette. I can remember it so clearly, that it wasn't a home-rolled one but a store brand one. Right there's a clue: We can immediately eliminate anyone who rolled his own!

But we walked around it far enough that I didn't see what brand it was. I did notice there wasn't any lipstick on the tip, so we can also eliminate the entire female gender. The cigarette had to be a man's, or maybe a woman's who didn't use lipstick. There were a couple of bars right near there, making it likely that the smoker bought his cigarettes at one of the bars. So I believe we can eliminate any pastors and their families from suspicion. And little old ladies, who either don't smoke or do it at home. I hate profiling, but time is of the essence.

The way I think the case needs to be approached is this: Find out who owned the stores along there who sold cigarettes, and ask if they remember anyone who would have been careless enough to toss it on the sidewalk. Or maybe they remember it happening. Next we could go through the gutters around there to see if maybe it blew in and got covered up by dirt. Or we could excavate the city dump, on the off chance that someone picked it up and threw it away. But how to know one cigarette butt from another! It was white, not brown/orange, if that helps.

With the mass hypnotisms, I think that's going to be our best shot. I mean, if I can remember seeing it, probably a dozen other people do too. I'd love to solve this case. It'd bring closure to the mystery in my mind as well as to the little town of Ted. And it'd be a great way to make a public example of someone, some man, probably white, under 35, married, and in a hurry that day.
Posted by dbkundalini at 7:14 PM