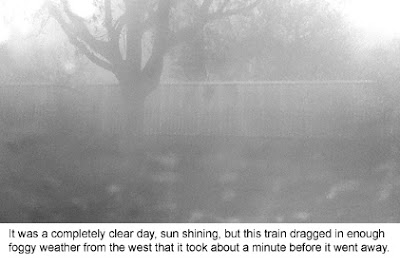 I've been doing my part to be self sufficient when it comes to getting the weather. Like the pioneers. They didn't get weather from TV or the internet. They did it themselves. Anyway, with the internet, everyone's always wanting to "save bandwidth," so I hate to waste it; why not look outside occasionally and see what it's doing for myself?

The obvious problem is that you can only see the weather happening right around you. If I had a big tower or something to climb on, then you could see it across town, but, still, that's not very far. So I started checking around, talking to some people, and they told me something they were already doing that I hadn't thought of. Keep an eye on trains coming through town!

So instead of looking on the internet everyday, like I used to, and wasting bandwidth, I've been going to the train station, along with a bunch of other people, and we're getting the weather report firsthand! And it's a lot of fun. The trains come through, we're looking at them, and it tells us just about everything we want to know!

"Just about" everything we want to know is the key phrase. Because the tracks only go east and west. If something's going on north or south of here, we don't know about it. The workaround we've got for that is to just make an average of east and west and give half of it to the north and half to the south. And anyway, my memory of the weather from TV is that it tends to go west to east, so it's no big deal.

So here's some of the stuff we've learned in the last few days: (And if you're out west, maybe you can tell me if we've got it right.) Two days ago a train came through from the west with snow on it. There was snow on every car, indicating to me that the snow out west was pretty severe. And you know how they have a reverse engine on the back of a train? There was even snow on the snowplow, which is really weird for an engine going backward! That had to be some deep snow!

Now, that was just one train. Then there were other trains coming through that didn't have snow on them. Our conclusion was that either the non-snowy trains hadn't come from as far away, or that they'd been on a sidetrack long enough for it to melt.

In addition to snow, we've seen all the other weather come through, including rain, hail, and fog. If you see a bunch of wet cars, that means rain. If there's denting, that's hail. And if you can barely see the train at all, that's fog. A train being a heavy and fast thing, if fog's just sitting out there, it's going to get run over. If boxcars are open, they fill up, and next thing you know, there's fog everywhere. For a few minutes, even after the train gets out of town, we have fog. Then it all evaporates, or catches a train going the other direction.

Talking to some of the old-timers, it's a lot of fun to hear what all they've seen in the past. One guy said he's been coming down here since he was a little kid, like 60 years ago. In fact, he's missing a leg from the time he tried to scoop up a handful of hail back then. I had to tell him how inspiring that was for me, that someone would be so dedicated to getting the weather and saving bandwidth, even all those years ago.
Posted by dbkundalini at 8:05 AM