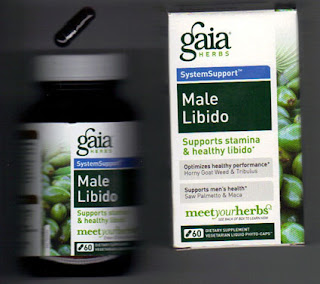 As a public service, I thought I would offer a review of this stuff, Gaia Male Libido. It's not exactly medicine, I guess, but herbs. The label says it "Optimizes health performance*," even though it says in the small print by the asterisk that, "This statement has not been evaluated by the Food and Drug Administration. This product is not intended to diagnose, treat, cure, or prevent any disease." OK, I wouldn't say the problem I'm addressing is a disease, exactly, but a condition or perhaps my hope to avoid a condition.

The thing is, I've got big plans for New Year's Eve tomorrow, and I was hoping to bulk up some...in a certain area. Then in the heat of the moment, I'll have all the extra confidence I might need. There's nothing like a sudden deflation to take the fun out of a good celebration. It's not that we don't love each other -- the Pink Professor and me -- but I don't want to have to impose on his love without something to offer, if you know what I mean.

(One of the biggest rules of my blog is that nothing "blue" is allowed, so I'm going to have to depend on you to "get it." I'm trusting that you've got some experience in these matters, whereas, if you don't, you won't be offended.)

Anyway, I've been taking the daily serving size of Male Libido for several days, which is three capsules. You take them between meals. For me, my interpretation of that is to take them right after eating. Each three capsules contain 3,495 mg of crude herb equivalent, which sounds like a lot.

So how has the product worked so far? Well, actually, I haven't gotten-it-on since I started taking it. Another of my plans. Thinking that if I hold myself back while taking it, the results on New Year's Eve will be that much more powerful. Like a boxer, who doesn't want to dissipate his vitality before the opening bell. In my case, I'm hoping to trade a drooping lack of apparent enthusiasm for something akin to the pride of a durable fencepost.

The only test, nothing to brag about, that I've given it is a couple seconds in the shower. I merely thought of a generic body part and saw it twitch a few times. I didn't dare go any further. What I'm wondering is if there's a placebo effect at play, because, like the rat, there was some actual mass. Or maybe it's just that effective!

The big downer, in my experience of the Male Libido pills, is a terrible sensation of heartburn about an hour after taking the capsules. I don't have that ordinarily, and now it's everyday. Plus, a much greater appetite. I'm hungry all the time. So it's a tradeoff, but worth it if I have a great holiday. The checkout guy told me "Happy Holidays." I told him we'd see.
Posted by dbkundalini at 5:00 PM