Shooting Fish In A Barrel -- I Fire Trade! 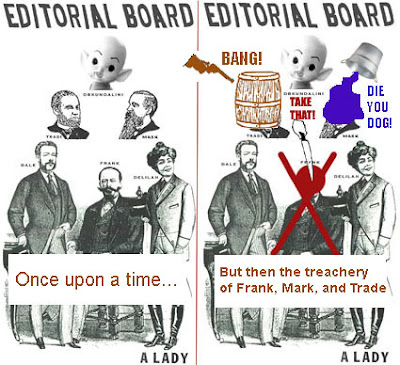 You haven't seen much of me here in the last couple days. It's been a tough stretch. But I'm starting to catch my breath, after being confronted so harshly by Trade Smith, up till now the only remaining member of my blog's Board of Editors on the 2nd tier.

It was no doubt a mistake to put two siblings together on the 2nd tier, since when one decided to be treacherous (Mark) it would be only a matter of time before his brother joined him in perfidy. The fact is that the very same "insult," as Trade took it to be was also directed at Dale, my remaining male board member, and Dale didn't seem to mind. But of course Dale is a funnier guy, not that serious, so maybe he didn't give it as much thought as Trade. Trade obviously stewed over it, his resentment built, the whole thing festered over, then he reached his boiling point and it erupted.

The insult, such as it was, and I actually didn't mean it in an insulting way, was in this paragraph from my post on "Jimmy's 18th Birthday at the Library."


I and the Board were well-dressed too, neither standing out as being over- or under-dressed. I was happy with my own choices. I had a full array of clothes to choose from, having done the laundry the previous day. Dale and Trade weren't wearing anything particularly memorable. But Delilah looked very sweet in a light blue, checkered dress, much like you might see in the cafe of a comfortable Alpine chalet.

I thought it'd be nice to take a few minutes and tell what all the principals in the whole drama were wearing. I went over Jimmy's attire, his mom's, his dad's, the library directors, mine, Dale and Trade's, and Delilah's. But the fact that I meticulously listed everyone's clothing, then said, "Dale and Trade weren't wearing anything particularly memorable," rubbed Trade the wrong way. Plus, if I could just add a bit of conjecture, I wouldn't doubt it if his brother Mark had egged him on in private. Like a devil whispering in his ear.

Anyway, he confronted me in the garage, where we work on the blog, and threw the now-infamous line in my face a dozen times in the course of his tirade. As he ranted on, I noticed he was wearing a seasonal long sleeve shirt, blue, button-down, attractive and neatly pressed black slacks, nicely polished dress shoes, and a Happy Wanderer type of green felt hat with a red feather, clearly an allusion to my description of Delilah's dress as something from an Alpine chalet.

"Couldn't remember it, huh!?" he charged, getting himself worked up royally, his felt hat going askew. "Nothing memorable about my clothes, huh!?" He complained that he'd put in his best efforts for the blog, helping to guide the direction of it, etc., and that it shouldn't be too much for him to get equal attention with Delilah or even me in the descriptions of our work together. I probably shouldn't have mocked him, but I couldn't help myself, flapping my hand up and down like someone talking who won't stop.

He started backing me up with his raving. Then I thought of the old truism about bullies: You have to stand up to a bully! I walked back toward him, throwing out some mean bluster of my own, coming to the conclusion that to have mentioned what he was wearing, even had I remembered, would be, 1) A waste of bandwidth, which I will not do under any circumstances; and, 2) To give him more than his due, because, I said, quite frankly I could care less had he been wearing a wooden barrel with two straps!

It was like I'd stabbed him. Apparently he looked up to me more than I thought. My opinion meant something to him, even with everything that had gone down with Mark. But instead of backing up, I doubled down, saying how great it'd be to put him in a barrel with a school of fish, and for me to have a gun and to try shooting them, with him doing his best to dodge the bullets! Which wouldn't be that hard. It's not like he'd be blindfolded!

He suddenly got all calm, knowing it was over, and smarted off at me, anticipating the charge of him wanting to have sex with Delilah that I'd thrown in Frank and Mark's face, saying sarcastically, "I suppose you'll say I'm imagining having sex with Delilah on your kitchen table, with all the trimmings." I felt a slow boil rising up from my core. I glared at him, my face feeling flushed, the heat now rising and descending between my neck and the top of my head, and shouted something like, "You have condemned yourself with your own words!" I dashed to the garage wall and yanked off the garden shears, saying, "You want the trimmings!? If there's any trimming to be done!..." I left the rest of the threat implied. As he hurried out the door, I shouted, "You are fired!"

The Board of Editors has obviously taken a massive hit. What started off so good has turned very sour. Now with Trade, the two 2nd tier is wiped out. That means we either skip having a 2nd tier all together, or the 3rd tier might become the 2nd. But I hate giving wholesale promotions, so I think we'll just leave it blank. It might make more logical sense to just say we have two tiers, the 1st and 3rd, like the Traveling Wilburys did with their albums.

I haven't told Dale and Delilah any of this yet, although maybe the Smith boys have filled them in. I'm just hoping they're not automatically against me when we meet again, especially Delilah.
Posted by dbkundalini at 6:14 PM