The Pink Professor -- All Night Long! 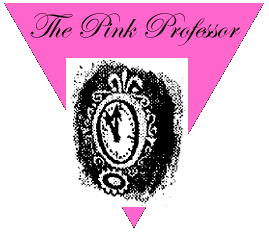 Well, folks, Happy New Year! The big day is here, New Year's Eve, and for most of us, it's going to be a really big night!

I would like to urge you, in case you haven't heard it yet, to be safe tonight! Don't drink and drive. Make sure you have a designated driver. And don't do anything I wouldn't, which includes just about everything.

I really have only one extracurricular rendezvous tonight, a little get-together to celebrate the New Year with my steady -- we've been together nearly a year and a half -- the Pink Professor. It's all monogamous and safe...

It's even more exciting this time around, not just because of the holiday, but because he's been away for a week or so, sharing Christmas with his mother and others. It'll be that much sweeter to see him. We'll be out on the town for a while, then the plan is to spend the night at his place. ALL NIGHT LONG! The whole night! Once I leave the house here, I won't be back!

Since my report yesterday, where I reported that it twitched in the shower merely by thinking of a random body part -- which was the knuckle on a pinky finger -- I gave it a little more of an amorous test this morning -- a body part that will not be described, although you might guess it if I tell you it's always got identical twins hanging out nearby-- it not only twitched, it swept the general vicinity with enthusiasm, like a geiger counter. If I can depend on that kind of response ALL NIGHT LONG, then I believe all will be well.

My biggest prayer is the biker's bar won't need him. In case you don't know everything about the Pink Professor, well, he's quite a guy. In addition to his normal job as a prof at the local college, he serves a very important role at one of the local biker's bars. That's the Pink Professor role, bringing a softening influence to the coarse environment and clientele that goes with the territory. He's great at preventing fights or helping to break them up quickly. And he makes newbies feel more at ease, keeping them from getting knifed, etc. But tonight I'm praying they won't need him! I'm praying he'll be mine alone for one night, ALL NIGHT LONG.

And so that's it! You've got your celebration, I've got mine! And I hope everyone's evening goes great!

I'm going to get my stuff together here in a couple hours, my overnight PJs, slippers, Kindle, and what not, and I won't be returning home. No sir, not tonight! New Year's Eve comes but once a year, and I'm going to make the most of it, ALL NIGHT LONG!
Posted by dbkundalini at 3:49 PM