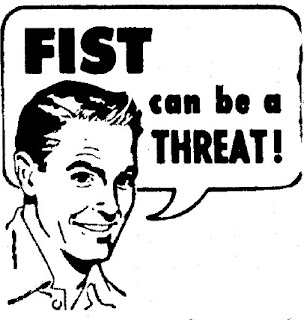 SUMMARY: A guy deals with the knowledge that one's stomach is as big as one's fist. He refers to his stomach by showing his fist, getting him in trouble.

If we wrote this as people took it, we might say, "He threw himself into the melee with reckless abandon, stomachs a'flying, and was able to clear the floor. Only later did he calm down and become increasingly aware of a terrible pain. Looking down at his bloodied flesh, it took a physician to bandage up his battered stomach."

Except he liked to show people the size of his stomach, holding up a fist, along the way leading to misunderstandings. Maybe had he taken a professorial tone, instructing them that a comparison was in process, it might've been different. But just to hold up a fist and assume the other party would know what he's talking about, it didn't always work that way.

The first time was in school, right after he learned the size of his stomach. He went to the school lunch counter. The lady asked if he was hungry, and he held up a fist. She took it as a menacing gesture, there being zero tolerance for such things in school, and he was immediately expelled. His mother and father at home were taken aback, asking what happened. He held up his fist, apparently not thinking to explain the situation with words, and they threw him out of the house.

He had no better luck with the pacifists, a group of peace-loving people he fell in with. They were headed to The Great Lawn, a grassy public spot in his town, to protest. One of the pacifists said they needed to stop for something to eat, saying, "I feel a bit peckish." Our fellow, hoping to show complete solidarity in the desire for a meal, held up his fist. The pacifist got the message and had to chastise him: "Dude! No! We're pacifists! No fists! You're out!"

He wandered on his way, forever in an increasingly bitter contemplation on the comparative sizes of his heart, fist, and stomach, with his stomach winning out through hunger. Penniless, he showed a kindly fruit dealer his tightened fist, who called for the police, leading our guy to jail.

In the jail, he's so hungry he orders a double portion, a meal twice the size. The jailer teases him, "Your eyes are bigger than your stomach!" A brand new comparison confused him. "No!," he shouts, then holds up an insistent fist.