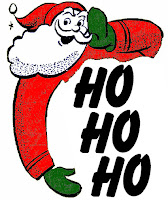 1
The War on Christmas recently opened up a new front, The Battle of the Ho Ho Hos. I might be a latecomer to this battle, focusing as I have on saying Merry Christmas and not Happy Holidays.

But having pretty much secured the victory on that front -- although the greeter at Walmart the other day told me Happy Holidays, leading me to waste a couple hours returning all my gifts -- I've moved on. You could say I focus on the "anger" in "Manger."

The latest thing is whether Santa Claus ought to be laughing in the traditional "Ho Ho Ho" way. I've heard teachers complaining that when kids hear Santa laughing like that it also gives them the giggles. But why wouldn't one guy's laugh make others laugh? Think of it like a yawn that makes everyone sleepy. Well, as it turns out, they say, apparently ho is now a slang term for the word whore. Who knew? We give in to crap like this?!

Just the other day I heard of some school in Sweden where they adopted a zero tolerance rule on Ho Ho Ho. You can be expelled for laughing that way. Santa was banished from the property. This cannot happen. As Sweden goes, so goes the world! 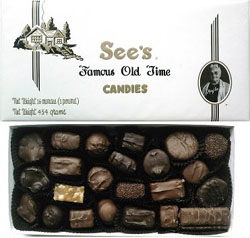 2
There's one old aunt I really miss at Christmas. She always gave us our own box of See's Candies, which I seem to recall tasted pretty good. I love the old time box, about as traditionally boring (in a good way) as you can get, complete with a picture of the old dear who started it.

You can still buy it, and I could get some for Christmas if I would plan ahead, but I never think of it till Christmas day.

Maybe now that I'm also old I could become the guy who gives everybody See's Candies. It's a great way to be missed when you're dead.

Speaking of relatives who gave particular things, we also used to get an actual silver dollar for Christmas, or maybe a few of them. Like those old 1897 silver dollars. Which, unfortunately, we never treasured, using them for bus fare, etc., or at the laundromat. No doubt the bus driver and the laundry guy were quick to take them.


3
Remember back when ladies wanted furs? Things have changed with the desirability of furs. I'm not sure how and when it all switched so drastically. There was a big stir about it a few years ago. No one wants to be covered in ermines and furs anymore!

I guess an ermine is some kind of animal like a mink, maybe it is a mink. It could be a type of bandage for all I know. So I'm hacking at a lady with a plastic knife, trying to inflict cuts so I can later cover her in ermines.

When we learned our animals in school they never mentioned ermines.


4
This year I listened to the soundtrack of "Rudolph the Red-Nosed Reindeer," the 1964 Rankin/Bass Burl Ives TV show, probably 14-15 times. It's basically the only one of those shows I actually like, and I mostly like it for the music.

I like the counterculture vibe to it, how the heroes are misfits. It's pleasantly subversive, although they do later find an honorable role in the prevalent culture. Other than that, it's entertaining with a big slice of sentimentality. And kids are going to be liking it for decades to come.

The other shows in the mold, to me, suck. The one with Fred Astaire is putrid. And I can't even remember the others. "Frosty the Snowman" isn't quite as sucky, but still it's very inferior. There is one other I like, maybe a little less known, "The Little Drummer Boy." It's got a lot of good bits. Plus, I like the deserts, the Wise Men, the travels to Bethlehem, the donkey, etc.


5
Christmas music. It's interesting to me that a few Christmas songs have become the enduring legacy of great artists of the past. They'd basically be forgotten were it not for Christmas. Even Bing Crosby fits in this category more and more. But think of Jimmy Boyd. If it weren't for "I Saw Mommy Kissing Santa Claus" he'd be forgotten. There's also "All I Want For Christmas" from him. Of course going along with Bing are the Andrews Sisters. And Nat King Cole. Bobby Helms. Brenda Lee. The list goes on.

Maybe some of these artists weren't gung ho on recording Christmas songs, going to the studio in June, but they'll live forever only because of Christmas.
Posted by dbkundalini at 6:15 AM