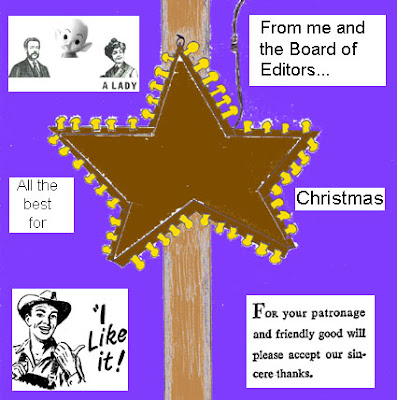 I awoke yesterday morning very early. It was pitch-black out. All I could see were the streetlights, an occasional car passing, and the twinkle from a few of the neighbors' bathroom windows.

It had been a cloudy night, and still, you could've cut the fog with a knife. Tremendously thick. It hit me hard.

The thing about it, why it hit me hard, was that my prayer before bed was that I might see the Christmas Star, and behold it. I thought, "Well, maybe next year. My prayers must have gotten stuck in the fog."

The Christmas Star. Just saying it instantly recalls the story of old that we all heard when we were just little tykes. It's one of the first stories I ever heard, and I remember the details of it even to this day. The Three Wise Men lived in their own country -- somewhere -- then they saw a magnificent star in the sky, appearing bigger than any other. The other odd thing is it went before them on their journey. They followed it, singing:

It was an awesome sign, one they were privileged to divine. Whereas everyone else was at their wit's end, with no clue. Then as now, miracles are tough to fathom. They kept going, and kept going, from one country to another, inquiring after kings and prophets to enhance their understanding. But none of them knew!

In the end, they came to Judea, and made inquiry at the court of Herod. There they met with the same perplexity, but finally the word came as to where Christ would be. They hurried on, and found the Babe with His mother and Joseph standing over him. As they offered their gifts, they beheld for one last time the Christmas Star before it vanished into the mysterious slipstream of eternity.

So I said my prayers, that the world, and I, might behold the Christmas Star again. I felt we might grasp the sign today with greater recognition, since we've heard the story a million times. But could it ever again appear? Suddenly, I felt the conviction that I must get in my car and drive. Drive? Where to? Just drive!

I kept driving, and the thought occurred to me, "Don't follow lights. Just drive out into the country where it's dark. And have faith!" So I turned down the crummiest looking, scuzziest, worst maintained gravel road I could find. I kept driving. It was so dark, even the deer weren't awake. I had no idea where I was going. But I kept going, praying, "Show me the Christmas Star!"

It took a while, but finally I crested one unlikely looking hill and there was a star on a post over by a guy's barn. He either forgot to set the timer to turn it off at 3 a.m., or maybe the powers on high had turned it on, just for me. It was nailed together and trimmed with light bulbs, the energy-wasting kind that we used to use without guilt. I thought, "How humble. Yet how awesome." This has to be My Christmas Star. It doesn't have to float around in the heavens for it to offer its powerful message. Naturally, I broke down, and to compose myself again was not very easy.

That's when I remembered the story of Christmas, the rugged, humble manger and all the rest ... and I knew all would be well.

May you also find Your Christmas Star! 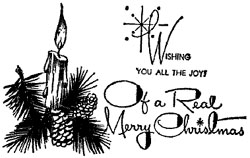 OUR CHRISTMAS CARD TO YOU:

On behalf of myself and the remaining members of the Board of Editors -- Dale and Delilah, our only female member -- I want to give you the best of all Season's Greetings, and our firm hope that you also will share in the richest blessings of the New Year.
Posted by dbkundalini at 4:55 PM