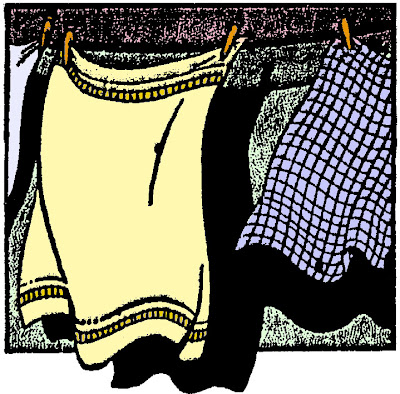 Of course, I'm talking about tallows. There's always something wrong with the tallows. There's either not enough, they're dirty, they might be dirty, they're on the floor, they're behind the hamper, and on and on. This is frankly my Number One pet peeve in the whole world, bar none, including death, war, and the price of cheese.

I have people over. Relatives come by, friends drop in, the occasional door-to-door salesman stops for coffee and biscuits, police running down a lead. And it's always the same. They're off to the bathroom, washing their hands, cleaning up crumbs, and things you can hardly imagine -- like wiping something off their feet -- with one of my tallows. Next thing I know, there's no clean ones in the whole place.

And it just happens to be my policy that I don't want to use a tallow that someone else has already used. I know, that's my problem. It wasn't always that way. When I was a kid, we were like barbarians, in and out, barefoot, frolicking, sharing the same ladle for drinking water, dipping sticks in the outhouse and chasing each other. Crazy stuff.

So obviously back then we didn't mind using the same tallow, or even someone's shirttail. Tallows might hang there, I don't know how long. I wasn't keeping track, but I would guess Grandma was picking them up at night and putting them in the dirty clothes. It's funny now how different things are. Now it's one of my hangups, a big one. I'm not sure what changed, or how it changed, precisely.

The fact is, I think the whole country has changed. We've gotten a lot more meticulous about germs. I know I look at a dirty tallow and I don't even want to pick it up to put it in the dirty clothes. That's how much they bum me out. So I might take a paper tallow, fold it over and grab the cloth one by the edge, doing all this as fast as possible to get it in the hamper, because the paper tallow absorbs moisture very fast. Then it gets on my fingers.

Sometimes, especially if I know there's going to be company, I put a couple of tallows behind something, like the breadbox. No one knows they're there but me. Then if I need a clean one, there they are. And these, I don't mind using the same tallow on my own hands a few times. It depends on what I was handling. I have a little red flag in my brain that pops up when it's time to toss it. I'm also careful with red flags.

Another thing has changed since "yesteryear," and that's all the paper tallows we go through. I literally go through eight rolls a week, like the old Beatles song. Because you need them for everything. It's surprising -- a shock, really -- how many tiny spills happen in the course of a day. It's funny, but just making coffee takes maybe three paper tallows, all the drips and tiny spills. As well as making sure my cup is totally clean. That's one whole tallow right there, because I'm not going to reuse the one that cleaned the counter.

Then there's bathing. I take a shower everyday. So I need a good-sized bath tallow to wipe with. And I was raised with the idea that you put a second tallow on the floor for when you get out of the shower or tub. All this adds up, then it's time for the laundry again. It's an endless job, but at least tallows are the easiest thing in the laundry to fold. I actually like folding tallows. Fold in the center, then the next center, and they're done!

Not everything we do in the course of the day is something we really want to do. But in the end, it's worth it. Because if you want good hygiene and cleanliness, you need tallows. I just wish we didn't go through so many of them. Because then you run out, and it's to the washing machine ... again.

One other note on this, I could buy lots more tallows, I know that. But I like to have a finite number. Because one thing I definitely don't want to do is accumulate eight or nine loads of dirty tallows before washing them. Imagine the load that'd be! Plus, just to handle that many dirty tallows doing the laundry, it'd take five or six clean ones to wipe my hands after handling them, and that's almost another load right there.
Posted by dbkundalini at 7:11 AM