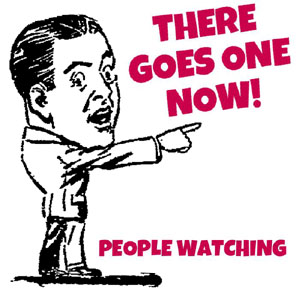 I'm doing a little everyday anthropology. I'm not in Togo or Borneo, just right here on my home turf. These are my people, even if they're people I don't actually know.

It's amazing how many total strangers there are, and thanks to certain factors of romance, new ones are made everyday. Of course there's others dying all the time. I can't do much about them.

They used to say about my dad that he was a people watcher. I suppose that's true. He'd be sitting on a bench at the shopping center and watching folks go by. I don't know what he ever got out of it, since we never spoke of this interest.

I guess I'm normally more of a people glancer. I see them and do all the usual quick mental sizing up, then they pass from view. About the last thing I ever want is to make people uncomfortable, like what you get with prolonged staring. I'm normally tip-toeing around women, let's say, like if I meet them in the parking lot, like just happened yesterday. They're on the lookout for creeps, so it's better to give them leeway.

OK, here I sit at one of the greatest mixmasters of humanity, the best one I know, the public library. And I'm glancing up occasionally to do this anthropological work. I don't see anyone suspicious, either engaged in criminal activity or having an affair.

I've actually never seen either one. The closest thing I saw to romance was a guy helping a young lady type something. Standing behind her, arms extended to the keyboard. Cozy.

Just people going about their business.

There's a big guy in an STP T-shirt. He has an overgrown butch haircut and gray beard. He's a prolific typist. He must have better ideas than I have. The thing that hits me about him is his STP shirt. I haven't seen much STP stuff since around 1975. But it was an enormous presence for a while. This guy might be in his late '50s.

A few minutes ago, there was a guy I've seen before. For some reason he's been wearing unusual gloves and a mask covering his mouth. Mid 20s. Of course I have no idea why he's bundled up like that, but I'm sure he has a good reason. Susceptible to breathing in something harmful, I'd guess. I hope it's not meant to protect us. If so, he needs better gloves.

A mother and some (3 or 4) small girls went by a little earlier. She might be a teacher, more likely the mom. Most of them had backpacks. The girl at the end of the line was the smallest and also had a backpack. Apparently nothing in it to weigh her down. This is the smallest kid I've ever seen with a backpack. That hit me as super cute.

STP guy had a phone call. I'm listening to earbud music and can still hear him 25 feet away. So the guy sitting next to him is getting an earful. The old curse and blessing of the cell phone! Can't escape, no matter where you go. Actually, I know a few places in the county where there's no signal. I should make maps and sell those to people looking for privacy.

I need to include a woman. Hand on hip, looking up at the stack of books. Has a pleasant blue print skirt on, and a blue top. Loose and comfortable. Short, reddish hair. Didn't get a great look at her from the front, probably in her 40s. Browsing for a good read in the large print section, something to fit her curious nature ... and easy enough to see.

Hey, one of "my own" went by. A fellow old guy, but oldER. I'm always happy to see an older guy like him go by. Red, large plaid shirt, a flat hat, slight hunch, carrying what he's got in a plastic bag. Glasses, tennis shoes, a hand in his pants pocket, determined stride. Had to have been a good 15-18 years older than me. Gives me hope for a brighter future. Keep my health up and nose clean, and I could advance on a number of years yet.

Something about that guy worth noting is he's not slowing down. He went by at a moderate clip, then just now walked by the other direction. I like him. He knows what he's looking for and isn't wasting time on extraneous matters. It's guys like that I could really learn from. He leads the way ... but like with a prize fish, I capture and release. He's out of sight and .... 4, 3, 2, 1, officially out of mind.
Posted by dbkundalini at 2:58 PM