My Report on Playground Turtles 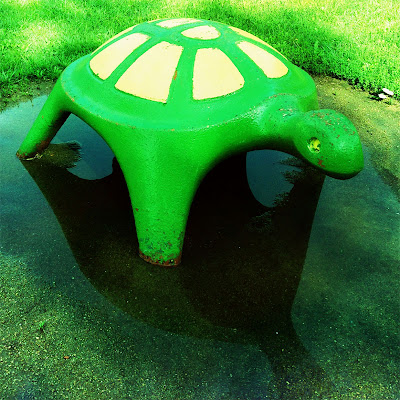 I recently had the opportunity to be part of an interesting study, which an exhaustive review of city parks files showed had not been previously done, at least as far back as the records go, to 1875. And as far as I'm concerned, the findings, for the most part, were positive, with the future remaining bright for playground turtles.

When the subject came up of studying the particular turtle in the photo, in order to discern its favorability with its target audience, children, I simply asked, "Who doesn't like playground turtles?" Could there really be someone? Since I've always thought they were pretty cool.

Then I went quickly through my memories over the years and recalled, in some instances vaguely, that negative things can and have happened. Kids getting stuck underneath, mothers become frantic, feel faint, etc., dreadful stuff no one wants to see. Still, we all have to accept some degree of risk in whatever we do. You could lose a finger or toe on almost anything. Have you noticed the effects of gravity on children who fall off tall slides? There's a huge risk of moderate bruising. So in the end, my overall take on playground turtles was positive.

This particular study came about when a friend of mine, who happens to work for the city, said to me that she never sees kids play on this turtle, and that maybe it should be taken out. Even though I'm only seldom at that particular park, leaving plenty of opportunities for kids to be there playing on it unseen, I had to admit that I hadn't seen any either. So maybe a study would be good.

Fortunately, there's an app for that! You enter the type of playground equipment, the sort of study you want to do, and set up the various apparatus needed for the task, as the app directs, and you're all set. It requires cameras, various sensors, and an electric eye system, depending on what your study needs. And all this stuff has to be set up so as not to catch the attention of the thieving general public, who would quickly make off with it.

We did it all, the whole thing. The electric eye -- we put in four electric eyes -- making a perimeter around the turtle. Whenever someone would pass through, presumably a child, the rest of the apparatus would go into action. The sensors on and under the turtle would register such minutiae as the intensity and spirit of the child's play, and detect various other useful information, body temperature, blood pressure, glucose levels, perspiration, etc.

The idea, then, was that that information would give a more reliable reading on the child's true favorability toward the turtle than we would get merely relying on video evidence. Plus, who knows, there could be some use for it in the future, like combining the medical care industry and playground turtles, making children more health-conscious through life.

The statistics, literally uploaded from our computer system buried there, revealed that there is an average of 8.25 kids at the turtle a day, give or take a quarter child. The most common activities are kicking the head, scampering and sliding over the back, lying with their face on its head and looking out, and, of course, crawling under it.

One boy -- we looked at the video a dozen times! -- came to the park with a body-sized suction cup on his back, like a turtle himself, crawled under the turtle, and stuck himself to the underside of the shell. We had some interesting footage of a very frantic mother. Finally, the boy, who had remained silent for a good 20 minutes, apparently as a prank, fell to the ground with a thud that resounded through the park. Mom saw him and was very angry, but happy. However -- and this is where everything went slightly sour -- in the fierce escalation of emotions, she had a heart attack, and died. After a minute, the boy was outside the perimeter and the camera went black.

But back to the study. As for the various body temperatures, blood pressure, and so forth, of the children, they were all in the normal range, no anomalies from what one would expect. On hot days, they were warmer; on cooler days, cooler. Everything seemed normal and actually quite predictable. This part of the study turned out to be an enormous waste of money, but I reasoned that it's better to know you know nothing than to regret not doing the tests and not knowing that you don't know anything.

In conclusion, playground turtles are a valuable item in any park. They definitely should remain in place. And where there isn't one, we recommend that park officials get one ASAP. We further recommend that the undersides be filled in, or maybe more reasonable, that the surface underneath be pocked in such a way as to resist the adherence of larger suction cups.
Posted by dbkundalini at 7:18 AM