An Old Man Down on the Police 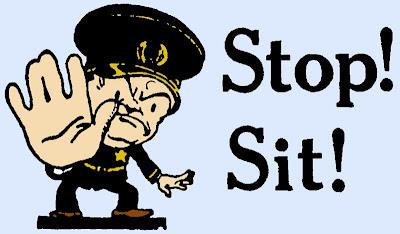 I met an old man today who was very down on the police. I don't meet many guys and this is the guy I get.

I really didn't know what he was talking about for a while. It was like some foreign word. He said something about "the po-po" being over there, pointing. I had zero clue what he meant, and said, "What's that?" "The po-po." "What do you mean, po-po?" "The police." I turned and looked in time to see them driving up the hill.

I was curious if he knew what they were up to, since it's usually an interesting story, but he didn't know. It could've been a huge jewelry store robbery, busting a major drug ring, or, more likely, waiting for speeders. But he didn't know. So I said, "You don't like the police?" And he said  -- and these were his exact words -- he'd "rather have a sister in a whorehouse than a brother on the police force," which sounded rather harsh. But he had a reason, that at least she'd be bringing joy to someone, whereas the brother would be "dicking" with someone. His words.

Of course that rankled me, since I don't have any problem with the police, and I'd hate it if my sister took that as her career choice, but what could I say? I took the therapeutic approach to find out why he didn't like the police. It turned out, according to his version -- looking just for the facts -- that one time the police wanted him to sit down, and he refused. So six of them, apparently, jumped him and took him to the ground. Big shout out to those six guys: Way to go, dudes! If it happened that way...

OK, we were off on other topics...

Then after a little while, we were talking about some old stomping grounds we had in common, although from different generations. He mentioned an old friend by name up there, probably from the '50s, "a man who wanted to be a pig." Again, I was oblivious to this kind of foreign tongue. I said, "What do you mean?" He acted like, "Isn't it obvious?" But I repeated it, again honestly having no clue, "a man who wanted to be a pig?" Then he clarified, the guy wanted to be a policeman. I hadn't heard that kind of "pig" language in decades!

I just had to say, No, I never knew that guy.

This is an old man, ladies and gentlemen. 80 years old! To all the police out there, he's very bitter against you. How can you tame the current generation of lawless youth when you have even bitter old men hating you?
Posted by dbkundalini at 4:47 PM