The Sheds of Butlic County 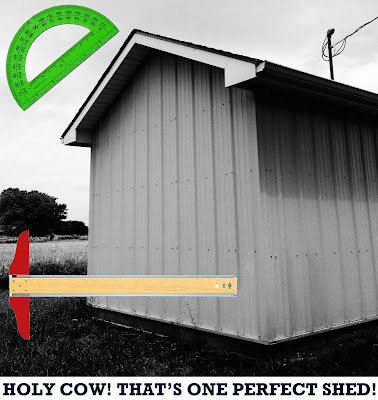 You could ask nearly anyone in the state what is one of the most interesting of our many tourist spots, and they'd probably say, The Sheds of Butlic County. Some college students even made a movie there about a couple adulterous farmers and ladies from out of state, Butlic or Bust. I never saw it, but I understand it had quite a bit of each. Also, years ago, some genuine Hollywood stars were in the area.

As for me, it's sort of funny. I could live right across the street from a tourist attraction and never go to it. But then, if I'm in some other state, I make a beeline for whatever it is, a famous rock or anything, The World's Largest Rotten Tomato. But I hadn't actually toured our famous sheds, until around three weeks ago.

It's a little different, as tourist sites go, since they're not in one place but scattered around the county. That means you either drive yourself or get on the bus and go with a guide. I thought $15 was a pretty good deal, with the price of gas, and also because you learn more with an educated person.

OK, the overall summary -- and I'll be looking at my notes here, excuse me -- is that a Mr. Ebenezer Tobias Peabody Smith, who wanted to serve the world as a priest, but because his parents were deathly sick on the farm and he had younger siblings, had to drop out of seminary and help the family, worked as a carpenter. Most of the things he built are long gone, but he built nine sheds, six of which remain.

Of the six, there's three major ones, making the others minor ones, very minor. But they do take you to the minor ones, mostly so you can say you saw them, but, frankly, I'd advise dropping out way before then. So we have the Big Three. And even these vary, being called the Best One, the Medium One, and the Other One.

The Best One has quite a story. (That's it in the picture. It now has modern siding and bears little resemblance to its original self, since they want to preserve it for future generations.) Runaway slaves used to congregate there, with the brave townspeople pretending to help slaves in another part of the county, throwing slave owners off track. But it all came to a head when a turncoat, Col. Butlic's greatest nemesis, Benedict Ziffle, led the slave owners to the shed. They almost burned it down with the former slaves still in it. But the townspeople took them on, rounded them up, and burnt them alive. The slaves were free! All that -- an amazing story! -- happened at this shed!

The Medium One has a so-so story. Two donkeys had been tied there in the late 1800s when their owners were in school. One donkey belonged to a girl, the other to a boy. But the boy's donkey was a female, and the girl's donkey a male. One day, nature being what it is, the donkeys interbred and ended up with twins, the male of which went to the boy and the female went to the girl. So all was right with the world. Walking the little path to shed, the guide said it was called "The Trail of the Four Donkeys." So I watched where I stepped.

Then there's the Other One, the other "major" shed. Its most famous story is how a farmer came up over a hill, again in the 1800s, back when apparently all kinds of things happened, unlike now, and thought he saw a family of fairies dancing on the green in front of it. Then, as he approached, the truth became clear. Turned out that he'd been drinking and mistook the sun reflecting off some metal bars and the swaying of garden variety weeds for a fairy family. I thought, Big damned deal. I've seen weirder stuff than that without drinking!

Among the many other interesting things the guide told us, all the sheds had famous people who stopped by over the years. Since they've been there forever, of course that wasn't so unbelievable. But the famous names! I was floored, somewhat. Especially when it came to the Best One. When President Woodrow Wilson came through, he and his wife stopped and toured the Best shed. The duties of office prevented him from doing the whole tour. So there I stood, right in the very doorway where President Wilson himself passed!

The Medium One was also visited by a political titan, at least halfway a titan, Henry Wallace. Ever heard of him? Turns out he was a vice president in the '40s. So that's a definite step down from President Wilson, but still not too bad. So I also stood in the doorway right where Henry, uh, Wallace went through.

Then at the Other One, the most famous person to visit it was a guy named Walter Seymour Randall, according to the guide the founder of Randall Eggs, an egg farm which has since been bought out by a conglomerate and renamed. So I also stood in the doorway where a guy who sold eggs once passed...

The final story concerns more gossip than established fact, since people are usually quiet about their romantic shenanigans. But the rumor goes -- and I'll be brief since I doubt anyone's too interested in who was boinking whom way back when -- that there was enough hanky panky at these sheds alone to repopulate a barren land, were each coital encounter to have resulted in pregnancy and subsequent live birth. So I'll just sum it up with a few names, without suggesting what may or may not have happened between them. The Best Shed: W.C. Fields and Mae West -- very, very cool; The Medium One: Roy Rogers and Dale Evans, a married couple; and, The Other One, Slim Pickens and Gabby Hayes. You might remember the movies, neither one was a straight man.

Anyway, what a tour! It was definitely fun to get out and learn. In my advanced years, I really don't do much learning, so I'll be taking some time off. But it was quite a refreshing change of pace. I hope I didn't give away too much. Because next time you're in the area, I would definitely advise you to at least visit the Best One of the six.
Posted by dbkundalini at 7:48 AM