The Ideograms of Ancient Chinese Orthography 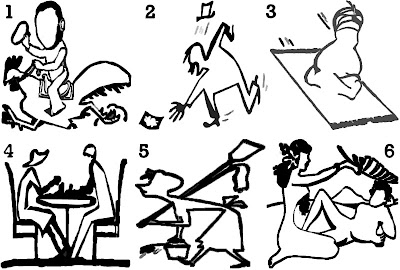 I'm indulging my orthographical proclivities today, specifically relating to the evolution of Chinese writing. As with anything taking hundreds of years to develop, naturally, the process took centuries. In the interest of time, we will not be able to cover it all.

Our study isolates itself in the earliest centuries, a time way before now. The time is so long ago, and memories so poor, that we can say virtually anything and no one will be able to disprove it. In that spirit of serious inquiry, let me simply state, the ancient Chinese system of writing used ideograms as seen in the illustration, presenting concrete situations, everyday occurrences, as a way of re-presenting them for the record, for reading and passing on. This system evolved, then, into today's writing, being much more abstract and yet still all of one piece.

OK, enough blather. Let's simply look at the pictures and see what they tell of us of ancient Chinese writing.

NUMBER 1 - This is what the Chinese had to write every time they wanted to say, "A man [or name] was riding a chicken." That looks like a lot of strokes, with the saddles, the feathers, and the detailing on the reins! It'd take quite a while to write it out if it came up very often.

We want somehow to consolidate the story. Like write the Chinese character for riding a chicken and simply diagram the race by who was in the lead on the various laps.

NUMBER 2 - Finding money is probably the same in every language. I like the Chinese version, though, for the real excitement conveyed. We try to evoke the same sense when we simply add an exclamation point, "The man found money on the sidewalk!", but it's not the same. However, when pictured, then there's a human story we can share joyfully.

I have to chuckle a little at this one, at the hat springing off in the man's excitement. It's those little touches that first gave me the sense of fun needed to learn Chinese.

NUMBER 3 - This literally takes us into flights of fancy. We have a nicely plump marshmallow-like man in a turban on a magic carpet, the Chinese letter for a messenger from the gods. I think this letter shows something of the vivaciousness of Chinese orthography. You have to picture him coming down in a flash, at super sonic speeds. As in others of the world's cosmological systems, it's all downhill from the Chinese heaven. So their messengers can only build up speed.

But for all that, we see no anxiety on his part. There's no grab bars, no seat belt, and even no trouble keeping the turban affixed. The mat is perfectly straight, showing in the simplest way the complete trust of the Chinese that help is assured, that it arrives with little trouble.

It might be good to see the messenger's return trip, but, alas, there's no such ideogram. Probably because of the embarrassment of the messenger's limited thrust going up.

NUMBER 4 - The Chinese word/letter for two friends having coffee is, appropriately, the picture of two friends having coffee. Given the ancient province of these letters, the illustration is surprisingly modern. The hats seem almost to be in the style of western hats for women in the 1920s, proving that the more things change, at least for the ancient Chinese unfamiliar with recent fashions, the more they stay the same.

There's not much more to say. I have always had a few quibbles over this letter, because the friends don't have faces. That seems a terrible omission since it conveys the idea of drinking coffee. Where's the coffee going, down the hole where their necks would be? My other major quibble is the unsteadiness of the chairs, missing as they are the back legs. These should be replaced, for safety if no other reason.

NUMBER 5 is one of my sentimental favorites. Again, it's from ancient China, but it's so modern and universal as it shows us the backbreaking work of women in every era. I say it's a sentimental favorite because it reminds me so much of my own mother and grandmother. They would work till they were bent, carrying heavy pails of water and mops.

Of course, water is always heavier than it looks. If you have a small pail, as is portrayed in the letter, that's not so bad. But it all adds up if you're carrying buckets all day, as some women must do to keep their homes appropriately spic and span.

Lest we are alarmed at the backbreaking work, there's another Chinese letter that goes with this one, showing the woman's work after carrying buckets and mopping. She reaches her brooms high into the corners of rooms, literally taking hours to knock down cobwebs and dust bunnies. This has two purposes, to clean the room adequately, and also to straighten out her back, preparing her for the next day's strenuous labor.

NUMBER 6 is one, that for some mysterious, unknown reason, my eye is always drawn to. I think it has something to do with the relationship between the woman and the man, although I can't be sure. The lack of lines within the figures, as is common in many Chinese letters, in this case suggests nudity, which, it can be argued, does indeed catch people's attention.

Then there's the setting, some isolated, rural locale, where inhibitions are few. The man is comfortable, holding a bottle of heavenly nectar, and his form is splayed out suggestively. The woman, her hair decorated almost as if she is the queen of heaven, waves a palm branch over him. This could be to fan him, to cool his ardor, or could even be out of her own seductive repertoire.

Looking closer, we see what appears to be a tree in the background. Honestly, I think this should have been dropped over the course of the centuries from Chinese script. It doesn't add anything to the letter, and almost makes it look like the woman has hair trailing from her-- from her-- from her form.

What precisely does this ideogram stand for? I hate to say, except I will mention that you still see it in the titles of many Chinese adult films.
Posted by dbkundalini at 7:43 AM