Help From My Ancestors 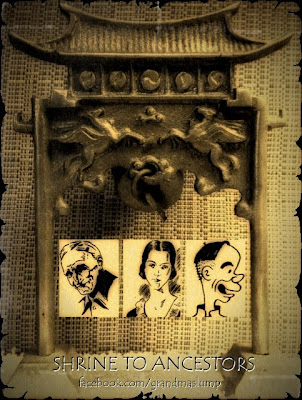 I heard from someone about the Japanese being big into ancestor worship. That they serve their dead ancestors more or less out of fear. Because if they didn't, the ancestors would come around and stink up the place. Or something. If none of that's true, my apologies to them.

Part of it I think sounds fairly cool, although the word 'worship' doesn't really ring true for me. And the part that really doesn't sound cool is serving them out of fear. Come on, the only thing that's changed is they're dead and years have passed. We didn't worship them when they were around, and they weren't all that scary then. Maybe Clarence was scary, but more about him later.

I really think I could work up at least some devotion to them, especially if there were really positive something in it. What that might be, I can only guess; it might be a little more balance in my life, self understanding, introspection, and a deep and abiding desire to waste my time doing unusual things.

Lord knows, a little more balance would do me good. After all, I had a suicidal great-great-great-great-great grandfather, Grandpa Something, I can't think what his name was, so we'll call him Something. He was so far back that we never met. Anyway, the only reason I'm even here is due to Something's incompetence! Because that's the way it works: If he'd been successful, that would have ruptured the line leading to me. Isn't it strange how tenuous our existence really is?

One thing, for me, that came out of hearing about Grandpa Something's incompetence is the lesson that there really are good benefits to failure. To fail may be a disaster and disgrace most of the time, but sometimes it's a matter of life and death. Had Something not been a great failure ... you get the idea.

There's family lore that Something was so incompetent, he actually fell out of Heaven five times! Odd fact. We got this in a seance from one of his contemporary cousins. Heaven finally took drastic measures and locked him in a church, of course. Where apparently he howls almost like a banshee. I say almost because, remember, he's incompetent.

I'm definitely not worshiping Grandpa Something. Closer in time, there's Grandma and Grandpa themselves. And my own Dad and Mom. You can see Grandpa and my Mom in the little shrine I made, left to right. Then I added my Uncle Clarence, mentioned before, more or less for comic relief.

Looking at Grandpa and my Mom naturally would give me balance. I loved both of them very much, and learned so many lessons in life that ... forget-about-it, mission accomplished, checkmate, stick a fork in it! They said it and I believed it. As for Clarence, he and I never met. Just look at him, why would we? But I heard about him!

Looking at the shrine, it's really stimulating a lot of thoughts in me. I've been meditating on it for 20 minutes between paragraphs. I have great memories of Grandpa. He used to take me fishing, pretty often. He was so patient, teaching me to bait the hook, how to set it, and how to reliably bring the fish to shore. Then Mom, a tender memory is how she used to make Spanish rice, then serve it with a rose sideways in her mouth, so cute! Things I heard about Clarence ... he always burnt his candle at both ends, which sounds very dangerous. How could he keep it under control? He didn't.

If I were to actually pray to my ancestors -- which is a foreign concept, although I could probably just substitute "talk" to them --  I might say to Grandpa, "Help me be more like you, showing your good qualities." And to Mom, "Your compassion for people was always so amazing. Help me develop that more in myself." To Clarence, what do you pray to a guy like Clarence? "Clarence, help me learn from my mistakes, even though I know asking you of all people is itself a mistake."

I think I'm going to ask Grandpa and Mom a question I've always wondered about. I'm looking at the shrine here, staring at it, 20 more minutes have passed by, and I've sat with this question solidly in my mind: "Is it true we become angels in Heaven?" They answer jointly: "No." "No?" I ask, "Can you explain?" "What's there to explain? We said no," they say, end of discussion.
Posted by dbkundalini at 5:52 AM