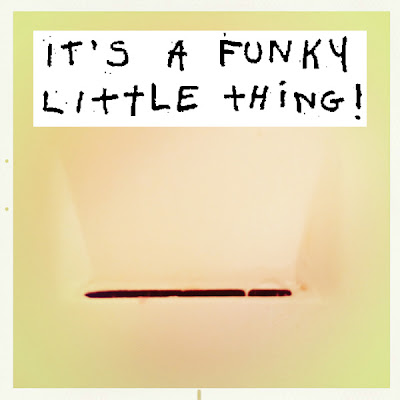 Wouldn't it be fun to see what goes on inside the razor blade disposal of an old medicine cabinet? I can only imagine, which is all I've been able to do, since I've never had the actual pleasure.

I know it must really be something, too, because I've known builders and home-wreckers who've seen it. But like in the battles of war, these veterans are suspiciously silent. In the case of war, they don't want to say what they had to do. With the blades, it must be something similar, too awful to describe.

Which is precisely why I'd like to see it. What kind of mess is it? You know it has to be bad. The old blades were immediately prone to rust. I used to see a blade set out too long on the shelf and it was rusty within hours. And it has to be just like rust on a car; it grows, it creeps, it starts attaching to things, and pretty soon the whole thing falls apart.

Just to imagine, then, what it's like in a well-used razor blade disposal, the blades are attached to one another, a big rusted assembly. Like modern art, maybe, just not as good. Rust is going up in a spiral, like in a cave. Every few days, more water drips in from a new blade entering and from the normal humidity of the bathroom or kitchen. (I have two such disposals, one in the "new" bathroom, made after the '70s, and one in the kitchen, the original one Grandpa shaved by.)

It'd do too much damage to the kitchen, I know, for me to start prying and tearing it out. So all these years, there it's set. Grandpa's been gone since 1977, so that's given the old blades a long time to settle. For all I know, they might be eating through the wall. If that ever happens, I'll take appropriate measures, fight them back as best I can. Use a fire extinguisher.

Grandpa didn't have any qualms about using the thing. For me, though, I look at it as a kind of small terrarium. It's an ecosystem for razor blades, but it's so finite, you don't want to put too much in it. But if you're not using it when you need it, why have it? That would be my original question? Why even have it? Of course it's for safety. When you need to throw away a razor blade, there's all sorts of dangers about putting them in the trash. Anyone could slice open their leg.

But they could've just as easily put in a detachable disposal system, like you see in the doctor's office, the sharps container, where you simply throw away the whole container when it gets up to about a pound. But no, for some reason, back in the old days, they thought, "We'll just hard-wire these things in the wall behind the medicine cabinet." Maybe make them eight inches deep, or better yet, let them go all the way to the floor. The razor blades then, even if you were in the house for 100 years, would never pile up enough to fill it.

Quite the idea, till you start imagining what's going on in there. Rust, doing all sorts of things. For all we know, it could be doing a DNA melt with your whiskers and skin cells, along with the moisture and mold, the house, and the souls of the people there. Pretty soon you've got a wall full of half metal, half spirit ghosts, or other beings come to life. Seriously, why else would builders be so quiet about what they've seen? Why else would builder be the only profession where they beg their sons to do anything but that?

The more I think of it, the more I'm willing just to let it go. I myself use disposable BIC razors. And they won't fit in the slot. The simply go in the garbage. And if there's any weird DNA/metal amalgamating to be done, it's happening somewhere else, not here at home. Still, I think I hear some tapping in the wall!
Posted by dbkundalini at 9:43 AM