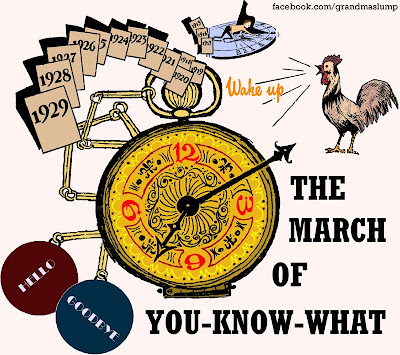 You're interested in the past. That's why you're here. We have spent our whole lives in what is now the past, and those are moments for us to celebrate.

Today, we are holding a gala celebration for the past, with the purpose of moving on from it. We are bidding a fond farewell to the past, that it all might be left behind, not with a bum's rush but in style and with honor.

I want you to enter the grand hall, with the audience where the audience always sits, and at the front a dais and lectern for the various leaders. Everything has been arranged in advance, you really don't have to worry about a thing. Simply stand and cheer at those times you feel would be most appropriate. Or remain silent.

There will be various ones, divisions of people, marching in. There will be the giving and receiving of awards and certificates. There will be so many different things happening that I won't even be able to write it all. You will have to imagine it where you are. And if you need to shed a tear over something, so be it. Let them flow.

On this occasion we will be extending our thanks and appreciation to those of the past. We will be applauding one another, listening to one another's stories with laughter and sometimes tears. There may be fist-pumping and backslapping. We will be holding up the glories of the past, revisiting the stories.

In comes the magnificent banner with our theme! "THE PAST WAS OUR HOME FOR MANY YEARS, BUT NOW ITS WORK IS DONE."

The representatives from the 1940s through the 2010s are more numerous, and the symbolic pictures closer to our own experience: World War II, Elvis, Kennedy, Bicentennial, Big Hair, Computers, 9/11, and Guns. I'm personally proud to have lived through quite a few of these. I'm still doing the whole Elvis thing, and of course working with a computer. As for big hair, I'm virtually bald, but I still have decent sidewalls.

I get a tug at my heartstrings with the '50s flag, since I was born then, was one of the world's first Elvis impersonators, at the age of 5, started school then, and crossed the road one time without my mother's permission. The '60s flag tugs at me, too, JFK. I was in an antique store the other day and saw a huge picture of Kennedy. I told him what I've already told his picture a thousand times, "Do not go to Dallas!" The '70s flag doesn't tug quite as hard. I couldn't wait for the Bicentennial to be over, and now it's ages ago. Probably should've put the Fonz on the flag.

Shhh ... they're doing one of the obligatory moments of silence for some past atrocity. I was typing when they announced it and accidentally tuned it out. But it must really be something, because people are putting their hand on their heart. Which I better do, too. And ... there ... OK ... the man at the lectern said, "Thank you," followed by lots of us clearing our throats and coughing.

I'm taking it all in. It's overwhelming, what the past means for us. And now, here, today, we're leaving it all behind! It's going to be tough! But rest assured, we will carry on. If we ever wonder then, "Whatever Happened to the Old Days?", we can know, with every fiber of our being -- it's like Doritos -- we're making new old days all the time.
Posted by dbkundalini at 1:28 PM