Eisenhower's Vision of the Interstate 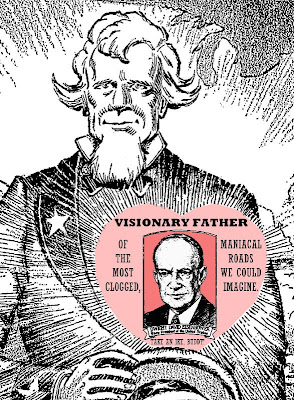 I know a few of you like interstate highway humor. Especially when it's laced with acerbic commentary, calling attention to the major disaster that is the interstate. Of course, we all drive the interstate highways. I just got back from a trip today, and it's tough to go any other way. But that doesn't mean I like it.

Still, think of all the positives. You can buzz along at 75, and things are generally OK. And then there's all those times when there's a truck in front of you, a truck behind you, and a truck beside you. When you feel like you might die any minute.

That didn't actually happen to me today, but there were certainly those times when I had to grip the wheel with all the steadiness I could, timing myself in relation to the others around, and keeping the same speed, or decreasing it, or increasing it. In those moments you realize what a computer the brain is, even if you don't have all the information about your surroundings; you have most of it, but some of it would require glancing around when glancing around isn't advisable.

The first part of my trip had an interesting moment. Several lanes of traffic, one lane elevated from the others (blacktopping), bumper to bumper traffic on the way to work, and a major accident in the area. I look in the mirror and there's an unmarked police car and an ambulance behind me. I had to wedge into the crammed lane next to me, that went up in elevation, all the while maintaining the same speed as everyone else. It was a tight fit, I couldn't completely see every variable, but I made it. I could've just as easily been dead.

All this anxiety -- a lot of convenience and a lot of nightmarish moments -- thanks to President Eisenhower, who's even got the interstate system named after him. They have a few stars -- must be referring to his time as general -- and his name. He wanted this system and he managed to get it.

Today we're wondering what was the full extent of President Eisenhower's vision of the interstate? Did he just see the good things, and those more or less indistinctly, or was he able to look down the clogged lanes of of maniacal time to see the whole picture? I think anyone as smart as him had to see it all.

Eisenhower saw all the gas stations and restaurants and shops that we'd get. Including -- does anybody remember these -- a place called Stuckey's. I was in Stuckey's maybe once or twice. I think they sold peanuts and butter brickle and other snacks, I can't entirely remember. But what I remember is that Stuckey's was always on the interstate, and they generally closed some time in the first couple years. They'd be open, then out of business, then a few years later open again, and then finally out of business, with their buildings staying vacant for 10 years. Eisenhower envisioned this and it almost made him reconsider the project.

Eisenhower saw how we'd get used to going down a lane and having to edge into speeding traffic. This is usually pretty easy. And I remember when we first did it how much I liked it. Because you didn't have to come to a complete stop and make a right turn to get on. Usually it's very easy. But when Eisenhower was envisioning this, he shrugged off the close calls we also get from folks who can't or won't move over. It's a matter of timing, usually, to know whether to move over, for those already in the lane, or whether to stop and wait, for those coming on.

Here's one of the worst things Eisenhower planned for: the entry to the interstate where you can take the wrong lane. Thankfully, I never have. They have a lot of red signs saying "WRONG WAY," but I've never gone the wrong way and needed to be alerted by these signs. But I've heard of people who have. And not just guys on TV police chases. I think this was a real mistake, not to have a dedicated lane for each direction. Doubling up isn't always the right choice. Way to go, Eisenhower.

Eisenhower, your presidency lasted quite a while. You had a fairly decent idea, the idea of the interstate highway system, but in your envisioning of it, you made some huge mistakes.
Posted by dbkundalini at 9:51 PM