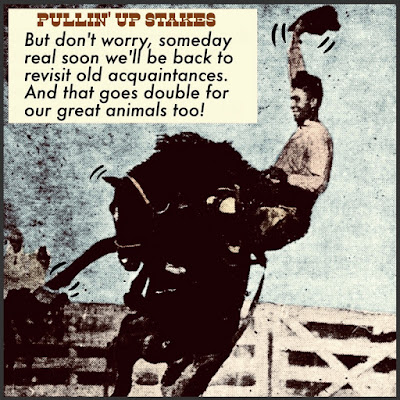 Saying goodbye's always one of the toughest things when it comes to a traveling rodeo/wild-west show. Some of the cowpokes have found new girlfriends and just got settled in when it's time to leave. But it affects everyone. It’s like saying goodbye to a loved one, like your dad when he goes into the service and has to report at such-and-such hours on a particular day. You’re afraid you might never see him again, which happened just like that in some of our more deadly wars.

Plus, rodeo folk are very emotional, going from place to place like that, never having a permanent spot to call home. They get used to the fans and especially the ones who are real autograph-hounds; they love that kind of devotion, which should probably reach across a lot of different occupations but always seems to center on the personalities performing in a big show, a major production.

But the calendar, while wide open on the days ahead, is very finite when it comes to particular spans. If you’re in a place two weeks, those days are frittered away before long and finally complete. It hardly pays to unpack because as soon as you do you’re packing again. Life calls us, though, everyone of us, to a bumpy ride of today, tomorrows, and the days of the far-flung future. What we’re doing today will soon be over and another span of time will open up, its vistas barely known, at least in their fullness. Getting fairly emotional here.

I remember way back, that’s the way it was with the traveling rodeos and carnivals, what have you, when I was little. And gypsies, which there were plenty of back then. What ever happened to the gypsies? I don’t know. They were very social people, so it could’ve been that one fell in a hole and the others were obliged to follow. I don't want to be spreading rumors, and I hope there’s no truth to that, but my mother really believed it, or maybe she just wanted to discourage me from ever being one. Whatever she thought, though, I kept to the straight and narrow, maintaining the path without fail.

Rodeo folk are folk just like us, though. And it’s easy to imagine that they’d like to have a piece of God’s sod that is theirs alone, a place to bed down at night and a place to wake up and see the same patch of sky everyday. There really is something about seeing the same patch of sky everyday, although I guess it’s not for everyone. Maybe for some of the more sentimental rodeo performers (and management), whereas any who are hardened or just have a tougher, more unsentimental bent it’d be different.

I remember waving goodbye as a kid to the traveling rodeo. We stayed almost till the bitter end, then I'd feel like I was going to cry and embarrass myself if I stayed another minute. So over the hill I went, then crept back a little bit later and they were gone. It was sentimental and they were fine folks, don‘t get me wrong, but they vanished so fast there wasn’t so much as a goodbye.
Posted by dbkundalini at 6:00 AM