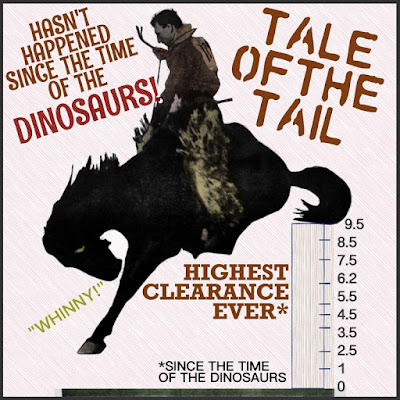 World records are a lot of fun. Of course they take various forms, the big huge official stuff, like when the first guy ran the 4-minute mile. Which is what a good laxative can do for you. Then the unofficial stuff no one thinks of, and maybe it never happens, like, say, the guy who wore his dentures the longest without taking them out. Someone had to! Just glad it wasn't my dad.

And that record could be beaten by now if we knew all the details. My dad had false teeth and put them in a container at night. So obviously he had no discipline when it came to world records, unless it would be the longest unbroken streak of putting them in a container every night. If he would’ve striven to keep them in his mouth the longest, that might've been something. But he didn't care. If you want the glory you gotta have the guts to put up with a little discomfort. In dad’s case, he was too crabby to try.

I’m probably the world-record holder in something without even knowing it. You can do dubious things and honorable things. For example, I keep my lawnmower in the dining room. I needed a place to keep it so it wouldn't be stolen and my dining room's pretty safe. But how would I find the current world's record? I could even actually push it room to room everyday, with lots of world records attainable. But it's not a great distinction. A bigger distinction would be “The longest a guy’s kept a lawn mower in the Big City without someone stealing it.” And I can’t brag about that because the thieves would show up.

Mam & Pap were always looking for unique aspects of the show to advertise to bring out sightseers to share the glory, but whenever it seemed they had something it turned out to be average. Finally, the perfect rarity jumped its way to immortality, a horse whose tail cleared an extraordinary 9+ feet, the highest such clearance reported since the time of the dinosaurs, which was the distant past. Way back before the Pilgrims, before the Model T, and predating Abraham Lincoln, incidentally my spirit animal, totally ancient compared to me.

The tale of the tail is a great record, having been scrupulously documented, the documentation now lost. I heard some yammering naysayers were disputing Mam & Pap's claim. To which I say, Give me a break! Mam & Pap lived a good moral life. If they said something about their horse's tail, their word's good enough for me! These people were good as gold, and their word better. But because dinosaurs are no more, obviously there's no way we can show a dinosaur's pathetic vertical leap again. Think about it, though, a dinosaur tale weighed around a ton and a horse's tail is about 12 ounces. Which would be more likely to flip higher with a vertical jump?
Posted by dbkundalini at 6:00 AM