Russian Spies At The Rodeo 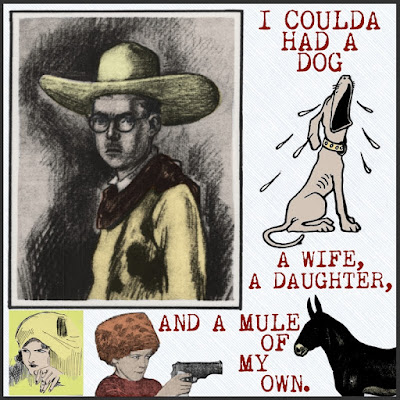 One of the darkest episodes of intrigue and international skullduggery took place -- believe it or not -- in Mam and Pap’s rodeo, with closely guarded secrets of the rodeo potentially a target. They were victimized by the Russians more than most. Those were very dark days, with many patriotic Americans memorizing bits of American trivia to keep the feds from accusing everyone. We didn't complain, really, because if the rodeo's not safe, what is? But we were careful, because you couldn't know too much or you were obviously a spy. I remember being very interested in the latest gossip but couldn't ask much or I'd be accused. So you can see, even going to the rodeo a lot carried some risk.

There was this one dude (pictured) who insinuated himself into the rodeo and it all seemed quite innocent. And maybe it was. I’m certainly no one’s judge and jury, although I do make snap judgments with the best of them. You look at him. Take one look at this beady-eyed glasses-wearing, unsmiling, hat-suspiciously-tidy scoundrel and see if your skin doesn't crawl. What secrets was he snapping up and radioing ahead to mother Moscow? Some of course refused to believe it — dumb people who think rascals can’t thrive under their own noses — but as soon as I heard one peep about it I personally judged the whole case an obvious scandal.

If careful skullduggery was the Russians’ modus operandi they must’ve taken us for some real saps to think we couldn’t pick up the clues. Look at the guy! He's obviously taken more by Trotsky than a trot becoming a canter. And look at his wife and kid. If I need to spell it out for you, please check your allegiance to the red, white, and blue. When you have a wife like that shamelessly insinuating herself where the national secrets are kept, think about it. And does the daughter look like the average American kid? What do they even call those Russian hats? Something, like the head-equivalent of a parka. And the gun’s self-explanatory.

They kept a lot of this quiet, but the feds descended on Mam and Pap’s show. And our friend Mr. Romanov tried to cover his tracks by crying like a baby and insisting he was a loyal American having fulfilled the typical American wish-list, a dog, a wife, a daughter, and his own mule. I don’t know if that’s what the Russians really believe, but my Grandpa worked three jobs before he got his own mule, although since then mule ownership has become much more common, thankfully, since we have enough other problems to waste our time on.

It was a sad day — though for a few hours definitely a great clash of two civilizations — when Mam & Pap’s show came that close, just a hair’s breadth, from full nuclear meltdown. As it turned out, not one animal was harmed and not one rodeo secret compromised. Everything was dealt with and the investigations were by the book. Whatever nuclear devices were found later among Romanov’s affects were meticulously buried outside the town. I haven’t heard lately but I believe on a clear night if you’re on a flight over that area you can still see a low-level mysterious orange glow.
Posted by dbkundalini at 6:00 AM