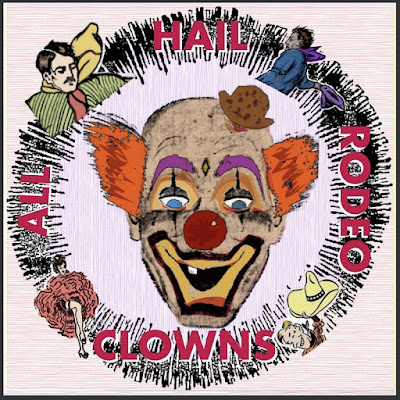 All hail the rodeo clown! Who doesn’t love the rodeo clown? Everyone goes to the rodeo for the excitement of the animals, the buckin’ broncos, the bulls humping their way around the ring, a cowboy astride his steed leaping through a ring akin to a fiery inferno, and the little dogies, on the run, going astray in the ring and needing the secure discipline of their ropes lashed together as quickly as possible.

Then there’s the possibility you might get lucky with one of the darling rodeo queens. I've always been pretty realistic, but once in a while one messes with you like she might mean business. When generally she doesn't, or it might even have been a guy behind you she was winking at. Then, continuing our survey, naturally there’s the delicious food, a little dogie patty fried to perfection on a bun. There’s your closeness to the earth when a stomping bull stirs up the dirt and you get a full snoot of it in your lungs, one of the rodeos’ biggest health-hazards but still kind of fun. And somewhere down the list of our favorite things, rounding out the list, are the clowns.

I personally do like the clowns more than dirt in my lungs, because I think I really might choke to death. And I know in my heart that there’s someone redeemable under that patchwork of makeup that never quite makes full sense. Why do they do it? It'd be interesting to try it myself, drinking all day and then being expected to do the delicate work of assuming an entire second face. You’ve already got multiple gut-wrenching complexes, it'd be very tough to fulfill too many other expectations. But you’ve already been suspended for “the last time” for fraternizing with the audience, even cozying up to them in line to the point of satisfaction with your eyes rolled back in your head. Of course you have challenges, who doesn’t? I’ve heard of priests who’ve strayed over the line, priests! And if they can be forgiven and get a hundred chances to make restitution -- sometimes so expensive it's an international incident -- who says rodeo clowns shouldn’t get 500!

Everyone — I know it’s arguable — goes into their field of work, their vineyard of endeavor, with the best intentions. Some of these string-pullers behind the scenes were calculating how many of such and such — let’s say cooks — will we need? After a while they get all the cooks they need, who periodically die of food poisoning and need to be replaced. So even though the number needed was temporarily attained, others need to aspire to cooking to replace the fallen. It’s similar with rodeo clowning. There may be plenty today, but if a few of them go totally loco and there’s a massacre, where are you going to find a thousand new rodeo clowns in a second? You can’t just snap your fingers, it doesn’t work that way. The pipeline always has to have applicants, those ready to step in on a moment’s notice to climb in a barrel and be bruited about the ring by a completely mad bull.

It’s grunt work to that point. But once the bull has been safely dispatched back to his pen, it becomes a moment of recognition, appreciation and love for the clown. He or she pulls a flower out, leans into it and smiles, as if to say, “I saved the day, ahhhh!” Another sees him extending the curtain call a little beyond its due and blasts a big gun, a bang and confetti is spewed everywhere, the clown’s way of saying — and this is their own particular language — “Let’s get back to work, you’re hogging the stage when there’s other worthwhile acts to come!” The audience roars with laughter.
Posted by dbkundalini at 6:00 AM