We Yearned For Mam & Pap 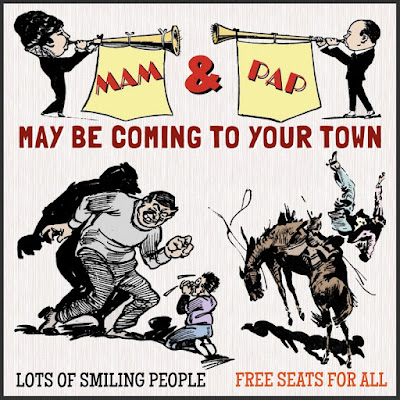 It was rumored that the last season was the last season for the Mam & Pap show, but no one knew for sure. Since hope springs eternal, we kept our fingers crossed. It had happened before. We'd think it was all over, then there'd be a last minute miracle and everything was back on. Your blood pressure went up, then back down, it was the unforgiving back and forth of life come to getcha. I remember holding my breath, but finally against my will had to let it out.

Under those circumstances, what can you do, but just step back and quit worrying about it? Because sometime has to be the last time for most things. At least in your own life. I’ve always accepted that. Like when I graduated from school. I wasn’t the least bit hesitant to let it go, but eager. Now of course, all these years later, I think, What was the hurry? I should’ve done my level best. I certainly should’ve done better in my senior level History of Rodeos class. Who knew more? But I was relatively dumb then, still sounding out the questions as well as I could. And I even had the practical experience of traveling a season and a half with Mam and Pap...

It might've been better for me, had it been an option, if I could've dropped out of school all together and traveled with them full-time. That would have been the real-life experience I was craving instead of the more ethereal high-flown stuff of school, the different types of lizards in biology, the beginning and end of wars in history, and who was sleeping with who, the walls in the boys' bathroom. With the rodeo it would’ve been me, a kid, and a bunch of crazy adults. I could’ve crept up to the tents and learned all I needed, biology, multiplication. Or just following Pap to bank after bank begging loans for payroll would’ve taught me many lessons.

Mam certainly taught me the value of a gentle spirit. And remember, she started out as “The Ruler of the Elephant Circuit!” That's some big shoes to fill or scrape off. Mam literally had elephants eating peanuts out of her hand. Which takes nerves of steel as well as trust in your fellow animal to stand there with an elephant munching away. Just look at an elephant sometime! Their eyes are so far from their mouth that with a trunk in the way they’re liable to bite your fingers off! Or worse, take your whole hand!

As it turned out, of course, my parents (killjoys) wanted me to stay in school. Which back then, like it or not, was their decision. Us kids had no rights. They ran their ideas up the flagpole, I had no choice but to salute. So to this day I don’t consider myself that patriotic. I take a knee around all flags. Including foreign flags, rival school pennants, and window decals. I’ve worn out so many pairs of pants I need a cheaper way to protest the many things I hate. By the way, I also hate alarm clocks and any traveling rodeo shows run by snakes. If only they were all as honest as Mam and Pap, that’d be heaven on earth.

Mam and Pap were easily among the dearest to me on this terrestrial sod, and certainly in the history of the traveling rodeo. It would've been a fitting tribute if they'd saved the ashes of their old animal friends as they passed, then had their own mixed with them. I bet they never thought of it. People are so worried about other stuff when they're alive. And it's probably too late to worry about it now.
Posted by dbkundalini at 6:00 AM