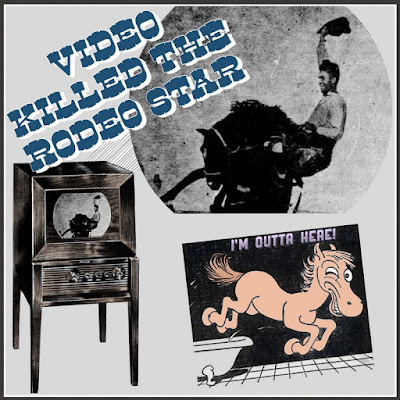 Mam and Pap’s show went way back to the more-thrilling days of yesteryear when rodeos weren’t on TV day and night. Now, as everyone knows, we can tune in everyday and see professional shows replete with killer bulls, tough, tested riders with their fist double wrapped in rope, and clowns that have been to finishing school and can tell their pinkie finger from their willy. The big difference with today's clowns is they're out there from the pressure of tradition, and because ordinary guys in ordinary clothes wouldn’t do. With modern contracts, they're probably selling 18-inch celebrity shoes.

And right there’s a big change since the days of TV, and especially with the novelty of TV rodeos wearing off after a couple decades. As far as I’m concerned, it’s all jaded stuff, no neighborliness, naturally. Hell, I could go on about my many complaints — I pick them up and amplify what I hear when visiting my fellow codgers at nursing homes. Of whom, just to be accurate, most of them are dead, so to a certain extent the remaining shreds of my life are being lived as a tribute to them, their greatest hits, in the complaints they shared about progress.

It’s the earliest days that are the most interesting, since we thought our complaining might do some good. The TV producers would get the message. We only like rodeos where there’s some chance of the bull actually landing in our lap before it's over. Now we can hit pause and go to the bathroom and come back only to see some guy getting bucked sky high and land in a corporately-sponsored pillow. “Get a Good Night’s Sleep with Zonko Pillows.” In my opinion, the pillow industry shouldn’t have gotten into the rodeo racket. You could write a whole indictment of it: “The Dumbing Down of Rodeo.” But I’m old, I’ll leave that to new blood.

The selling point of TV — there were several — were convincing. You’ll have the rodeo right in your living room. No need to go out to a smelly fairgrounds. No waiting around for anything to start. No crooked rodeo performers stealing from your car. And on and on. The biggest thing of course was the convenience. They also put it forth between the lines as a great equalizer: "Now even a one-horse town can have all the horses it can stand! Where before they couldn’t support a one-horse rodeo!” With TV, the show from Las Vegas is a local event.

We had some meetings and demonstrations, heavily reported in the local paper but ignored by TV, with their bias. At first it was “Down with TV,” but our numbers and enthusiasm shrunk quickly as sets were snapped up like dirty magazines and replaced the real thing with the feel-good experience of instant gratification in your own home. You could even hear it from your own bathroom, which could no longer hold everyone up with an endless line to get in. Back then you might catch a glance of the guy standing next to you, then realize it's a horse!
Posted by dbkundalini at 6:00 AM