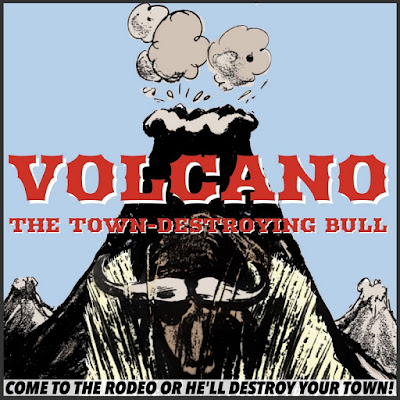 No. 9 of 30
The Mam & Pap
Royal Splendid Traveling Rodeo

Somewhere I’ve heard it said, “What’s in a name? Rosy red lips would taste as sweet.” I think it was maybe something I said myself. It's certainly a truth that nails it, that battens down the hatches, with anything that hatches from here on out having to learn to fly on its own or it’ll sink like a stone, which in the long run we know it must.

Certainly a massive bull by any other name could be just as dangerous, but it took a particularly lethal name, Volcano, to start this bad bull out with a serious reputation, along with him having actually once destroyed a town. It sounds worse than it was because there are some very tiny towns, no joke. The town was incorporated by a family with a house and a bull. The bull became injured in a tender spot in its male anatomy. Then kicked the living daylights out of that house, hence, the town. And “lava-ed” all over the remains, making him … Volcano!

O boy, some of the stories from the Wild West are traumatic, but the family quickly rebuilt, then printed a line of postcards about Volcano that made the place extremely popular. It grew and grew until … Well, it’s still there. I believe you’ve heard of Wichita, Kansas? Who hasn’t heard of Wichita, Kansas? Even Glen Campbell went through there when he was stringing telephone lines. But back then it was just a one-bull town until Volcano destroyed it, then it was rebuilt by the love of a people with bitter memories who moved to the area much later than the original incident, adopting it as their own, forging their own way through the destruction and grief still felt to the core, finally creating a heritage that some believe still endures to this day.

Our bull in recent years, the one in Mam and Pap’s rodeo, was named after the original Volcano, although a lot of folks in Wichita -- still rattled from the destruction they never witnessed -- get the two mixed up. The reason is easy to understand, at least to those of us on the outside without a vested interest in conflating them: Bulls have a relatively short lifespan. And Wichita hasn’t been destroyed any other times than that once. And never by a different Volcano under different circumstances.

Anyway, Mam and Pap’s Volcano recalled those days and built on the legend, giving their Volcano a reputation that even in the years since his death he hasn’t been able to live down.  Towns on the circuit — as long as old men mutter legends and old witches nurse a grudge — say such things as “Volcano shall return!” It started as a kind of legendary longing for the old days when destruction was complete — a whole town destroyed — to become proverbial about the rodeo bull of the same name, that he would live up to his name, come what may, if people on the circuit didn’t come out to pay him tribute.

If I were living in that time, with superstitions up the yin-yang, I suppose I’d go out and pay money to see the rodeo, hopefully buying for myself insurance against my own cabin (or town) being destroyed. So far so good, knock on wood, praise the bull, I’m personally still living. Now I’m in a house that hasn’t yet been destroyed, and I’m in a town that will likely still be here tomorrow. But, praise Volcano, I'll never take anything for granted.
Posted by dbkundalini at 6:00 AM