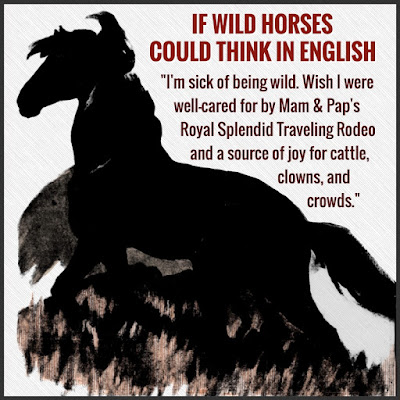 Those who know me well know I’m something of a “whisperer.” Not that I’m really well-known for being quiet, but my normal way isn’t to bang a lot of pans and shoot guns in any unwelcome sense. No, when I’m on my way somewhere, I mind my business and get there in a subtle way, nothing announced. They look up, there I am, and it's a total surprise. “What the—? Don’t sneak up on me like that!”

Most of my “whispering” has been directed at my various dogs over the years. Telling them by pats and strokes and affectionate words and actions that they’re great and they and I are simpatico. I have, though, been afraid of animals like wild bulls, and so have taken precautions to avoid them. My dear old dad, often gored by bulls as a kid, told me if you ever walked in a field with a wild bull and showed even the smallest piece of red cloth, you’d be a goner. So being a person naturally inclined to a cautious demeanor, not only did I leave all red cloth at home, I avoided fields with bulls.

It's an interesting sacrifice, too, because I'm fairly drawn to red cloth. But you never know when a bull might show up.


Wild horses of course are not bulls, but six-of-one, who knows, maybe they don’t know what they are. They’re wild for a reason, and wildness carries consequences, and consequences can’t always be expected to be positive. In short, I’ve also kept a healthy distance from wild horses. And everything, really, I'm insulated. One of my biggest fears is that freaking out wild animals and finding myself dead or badly mauled enough to wish I were. That’s a low point in anyone’s life, prefering death to being badly mauled.

But anyway, I’ve sought out the experiences of those brave enough (foolhardy souls) to be animal whisperers. The rodeo gets some of these sensitive souls, and it helps them fill in the slate of performers on the cheap. For every wild horse you take in and no one’s mauled, it’s a boon to the show. Enough procurements like that and Christmas bonuses can go to every employee, so it’s win-win.

I’ve talked about this subject over the years with friends, and it seems like people are increasingly of the idea that wild horses prefer being wild. Which isn’t indisputable, naturally, since it’s tough to know 100% what horses think. But to me it looks like a horse is a horse and if it gets an occasional sugarcube it’s pretty well content no matter what the other circumstances are. My cousin had a horse that was hard to catch, but once you caught it it was content to be with you. Just don’t let it work up a gallop downhill and buck you off; that was it’s breaking point. Probably should've tried sugar.

Long live the rodeo horse, wherever they come from. May they give joy to cattle, clowns, and crowds. And as well receive whatever joy they would seem adequate for their psychological needs.
Posted by dbkundalini at 6:00 AM