The Trouble With Swag 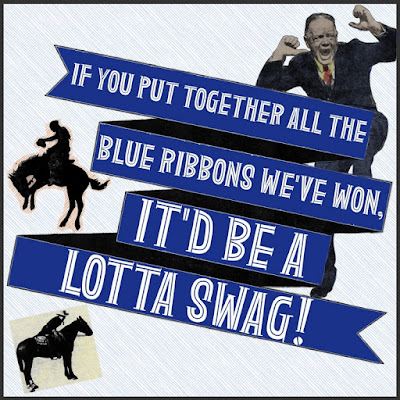 Forgive me if I’m a little clinical on this post. I’ve done some work over the years in the field of challenges and accomplishments, not so much with setting goals and fulfilling them but the personal ramifications of having accomplished the task. Primarily what it means in terms of pride, self-image, comparing yourself to others, and boasting.

So when I find evidence of Mam and Pap, and especially their underlings, puffed up with pride not only for what they’ve done in terms of the rodeo but the social markers of recognition for their several accomplishments — in this case, blue ribbons — I’m interested. I suppose most people who are recognized for an accomplishment can barely forego a moment of pride. What is more interesting are the ones who accumulate those tokens of recognition and see that as a greater accomplishment than the actual accomplishments themselves.

It’s one of those unconscious, subversive traps — depending on your psychology, no doubt, with parenting issues, whether you still peed your pants in your 40s, etc. — that so many of us, well-balanced and happy but not necessarily insightful as to what drives us individually, fall into. Of course it’s part of the Human Comedy, and I can be as ridiculous as the next guy, and for that reason alone it’s part of the fun. You go to someone’s house and they have bowling trophies over the course of a successful pursuit of the hobby over the decades. It’s hard not to think, “You poor deluded fool,” even while smiling two-faced, praising him for such a great game in 1965 with the evidence of the memorable victory still front row center.

Traveling rodeos of course are not a competitive thing in tournaments and contests that pass out trophies or ribbons. They’re a capitalistic enterprise that, beyond the normal interpersonal fun they have, are in it for the money. They get their money, and if they’re in management, they reinvest in the rodeo. If they’re employees they save a little, send a little to parents and kids. If they’ve crossed the line somewhere they pay off whomever’s on their case. And life goes on. But getting to the rodeo in a permanent capacity, most of the talent has gotten blue ribbons and other recognition. And to a lot of people that swag means something.

The fact that it has this whole fictitious side is what interests me. Because it’s hard to go back and contextualize the scene when you won the swag. Were you up against real talent or was it you and four halfwits? The records aren’t great on these things. You performed feats of strength. Was one of your competitors Superman? Or just a couple of PE dropout squirrels? You won honors in a cake-baking contest. How do we know you didn’t pay of the judges? So many questions, potentially meaningless.

In conclusion, your swag — be it blue ribbon, red ribbon, trophies, or a Billy Bass fish flopping back and forth on wooden plaque — ain’t worth squat. Like they say in the old religious classic, The Old Rugged Cross, “Till my trophies at last I lay down.” Or equally profound, Billy Bass himself, don’t hang him on the wall when he’s clearing saying, “Take me to the river, put me in the water.”

----
I’m submitting this post to an academic/humor blog site to see how it fares in the competition. (The biggest competition I get are guys still stuck on Polish jokes.) I promise that any swag I get I'll put on a fence post and let a friend with a high-powered rifle blow it to bits.
Posted by dbkundalini at 6:00 AM