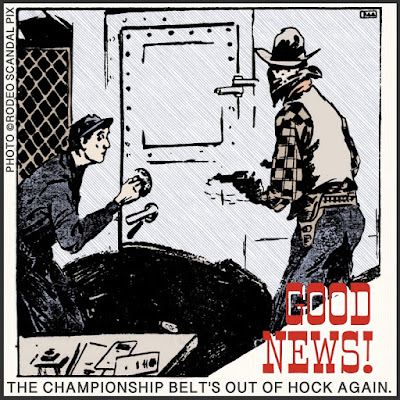 It was good news to learn that the championship belt, secreted away in a bank vault with the rodeo having financial troubles, was quickly returned. The exact details of its return are still sketchy, but according to the little bit I know, the bank and the rodeo came to a mutually beneficial agreement.

The terms ran something like this: 1) The bank wanted to be paid back. 2) But revenues are always down when there’s something going on with the championship belt. The fans are more interested when there's a championship belt at stake. To them the whole rodeo is basically summed up in the questions, “Who’s in the running for the belt? Will the champ keep it? What is he willing to do to keep it? Isn’t he getting a little flabby? Is he ripe for someone to pick off? I will definitely pay good money to see how he manages it. But if the championship belt somehow slips away it'll be a nightmare situation, the doomsday scenario itself, the end of days. What on earth will we do if it somehow slips away?”

One year they advertised it in similar dire terms, which turned out scarier than expected. Supposed assassins were in the rafters to guard against any chicanery. Any shooting would be at their discretion. The assassins were masked, wearing atypical clothing, dresses from thrift stores, etc., so they couldn't be identified by their usual garb. If I had been consulted on the promotion I would’ve told them, “Please, no live ammo,” but I was away taking my driving test because my driver’s license had expired about a week before then -- damn the luck! -- and the corrupt police were just itching to nail me for driving without a valid license.

Well, that year showed us some of the folly in allowing live ammo in any promotion. It turned out worse than I feared. Three guys were shot, two of them winged and one guy got a hole right straight through his bicep. The doctors had to go in and restitch his muscles into place. Which worked out well for him, because before restitching it his bicep was weak as a kitten, but with the restitching he was strong as a tiger. You might remember him from a health insurance commercial, the testimonial where the rodeo guy praises his great coverage and successful bicep restitching. That was him.

Anyway, everything can have a happy ending if we help it along. Including the centerpiece of this post, the centerpiece of every competition, the championship belt. There's no substitute for it! Either it’s there or it’s not. And if it’s not, very few people want to be there either. Was there gun-play involved in getting it back? I’m not at liberty to say anything about the details. But I can reassure anyone concerned about how the operation went down, there was absolutely no call for any restitching of biceps, midsections, legs, or heads. It was a happy ending all the way.
Posted by dbkundalini at 6:00 AM