A Target For Assassins 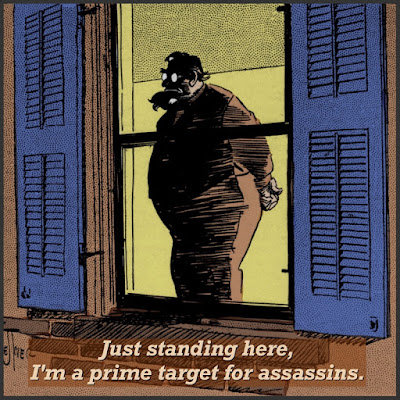 It'd be a terrible, strange, not-very-nice feeling to be marked for assassination. I can see it from every angle, me in my innocence walking along minding my own business, then from the shooter's scope with the hairline bullseye, the gun barrel letting him discern the precise bearings. What a dirty skunk he is to want to shoot me, the most innocent do-gooder and go-getter in the world! Before me the world was basically lost in a jungle of misery and confusion, then with a few run-of-the mill blog posts enlightenment came to the masses. It only happened relatively recently that I went to a hypnotist who helped me give up all reticence when it came to writing and just puke it out. Since then the world's been a better place. I hardly recognize it.

But there are cases where even if you're a great guy you're still an assassination risk, and I suppose they could mistake me for someone else. Some people say I look like Einstein, some say I remind them of Martin Luther King, and others say I resemble Butch Smith, a childhood friend. So if I thought long enough about it -- that's long enough -- I could get really paranoid. To think, a mob boss is out there somewhere hiding in my humble neighborhood. There’d be no better cover. Then he goes out seven or eight times to walk his dog -- like me -- and the sight of me humbly picking up dog poop is so offensive that he wants to make me a victim. He radios to the gang: “I'm going for a head shot." That's terrible!

So without professional security, I have a lot of bases to cover. My next defense might be plastic surgery. They operate on me with plastic knives and forks, no clinking of metal to alert the assassins at their rendezvous nest, full of vipers. An eye-tuck here, a nose-tuck there, next thing I’m barely recognizable to myself in the mirror. Even my mother wouldn’t recognize me, although she's passed on.

Even if there aren’t any actual assassins gunning for me -- and this is where the real value to my schemes reside -- there are lots of attacks on other people, guns blazing, knives coming down at a 45 degree angle, people poisoned, you name it. The other day there was someone shot out of a cannon and he landed on the interstate and 12 cars ran over him trying to avoid him. That's another cause I promote: "Avoid Distracted Driving." They’re screwing with their radio, reaching to the glove compartment for make-up to apply on the trip, lipstick, or trying to hit the kids in the backseat, or just putting it on cruise control and drifting off for a catnap. It’s far too easy to imagine 12 cars running over an assassination victim if he's crossing the road.

Despite the risks, I still need to go out today, pick up a friend from a medical appointment, and of course tend to the dog, her business. If you should comment on this and I fail to answer you, assuming you deserve an answer, please call the police and let them know: "A guy from your area has just been assassinated. Please send help and a body bag. What's he look like? Sort of like his old friend Butch Smith. Or try Einstein or Martin Luther King, Jr."
Posted by dbkundalini at 6:00 AM