Is Susan Really A Bat? 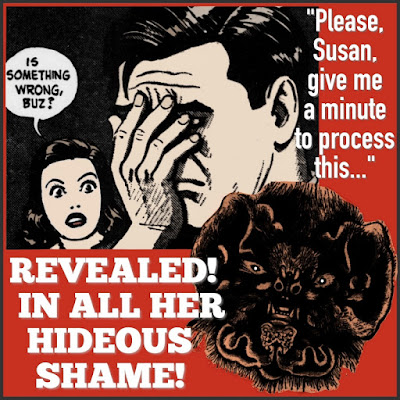 I feel like I learned something like this at the state university, although it’s been so long ago that I can’t remember the details.

There was a theory or speculation questioning whether what we see is reality in any real sense (whatever that’d be) or if the things we see are completely different, right down to shapes being utterly different, etc. If you think about it a while, it makes sense, but we’re very resistant to it because "reality" appears to be a given. Our hands feel something, we jump to conclusions. Like the story of  the blind men feeling up the elephant. He has tree trunks for legs, a necktie for a tail, and a sturdy windsock for a nose.

The theory -- a naysayer’s dream ever there was one -- is that every assumption is to be questioned, because we can’t be sure what reality is. I would’ve taken the professor on, but my vocabulary was pretty limited around smart people. But I still could’ve gone out on a limb: “Uh, professor, I notice that you express your thoughts with the same words we use. If everything is to be questioned, don’t you think you ought to come up with a vocabulary that isn’t part of the same farce? And your clothes appear to fit your body as though it’s shaped in such and such a way?” Where should the questioning begin? "What do the clothing know about your body that my eyes are missing?" OK, enough of me flaying the guy to no profit. Because I actually flunked that class because of other issues; honestly, I skipped all the tests on the theory that the tests, though required were actually not required. Which would be more true to the spirit of the class. But according to the professor -- against his previous scruples -- the tests were actual tests in the traditional sense!

Our guy in the graphic has something of that mindset going on. And probably all of us have been there a few times. It hits me occasionally, out of the blue, that I think things are the complete opposite of whatever everyone else thinks. It might be tricks with my eyes; I can’t make out what’s right in front of me. For me it's a serious side effect of paranoia. Your senses just go wacky, or perhaps they’re indeed fine tuned according to what reality really is. Even if that's the case, I’m still happier when reality goes back to its good old false self. Because I have most of the rules of that reality memorized and anything new I'm forced to "learn" I’m automatically against. If not because I can't accept its reality, but on general purposes, I'm just too mentally exhausted to accept new things.

I know I’d hate it if someone mistook me for a bat. And Susan here must be the same. “Look again, Buzz, does it really look like, does it really feel like she has a furry face like a bat and little beady eyes and a bat-cave that she returns to every night? You know where she is, right by your side, not hanging in a drizzly cave with the occasional bat flitting by.”
Posted by dbkundalini at 6:00 AM