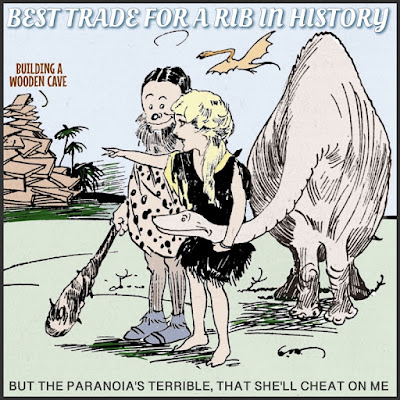 I've got it going on a few days with the caveman, today accompanied by a beautiful blonde cavewoman, thrown in to soften up the place and give her the satisfaction of existence, such as it is. No matter what, I'd say just having her around would definitely make the toughness of life easier to handle. She'd be great to share life with, the ups and downs, conversation, and whatever followed from a quality relationship. She's got it going on.

But -- easy come, easy go. Anything you receive something (or someone) you can just as quickly lose them. I mean, I'd never do it to someone else. And full respect to everyone trying to cope. If you had something, unless you took it from me first, I'd leave it with you. But not everyone's so kind. I was just at the grocery store yesterday and someone stole a sack of groceries from me, true story. Which was weird, because she must've thought I had caught her, so she acted like she wanted to help me if I was missing something. I thought it was kind of weird, but figured she was just being friendly. Then I got home and was missing a sack of groceries, the items, and figured out the whole weird story. I'd never do that to anyone.

I want to examine this situation a little closer. Pretty decent curves, huh? The face, a very friendly look, like 'I'd never do you an ounce of harm!" And "I'll be right by your side, come what may, whatever enemies we might face..." And that's just the dinosaur, the woman would probably mean well for me, too, making the three of us a force to be reckoned with. She seems to be pointing, not quite, to the pile of lumber the Creator stacked up for the caveman, to build a cabin or carve out a cave.

The situation then turns a little sour. This has happened to me. If you think there's the slightest security -- smooth sailing from here on out -- you realize, no matter what, security's shaky. One day of happiness quickly overbalanced by three or four years of misery. There's karma, then there's Super Out-of-Balance Karma, the terror of unmerited discipline every time you think you've gotten a foothold on the future. In reality, it's more like a footHOLE, something to trip over, stumble over, and sooner rather than later fall into. If the hurt doesn't kill you, the embarrassment of it will.

Then you get a few neighbors. They see your weakness and move in. "This guy won't mind if I park my carcass a house or two down." Then he sees my hunting and fishing techniques, steals all my patents on things, the Anti-Pterodactyl radar, etc., and finishes off his victory with a brand new relationship, a certain blonde with a fickle heart.
Posted by dbkundalini at 6:00 AM