From Cave to Bungalow 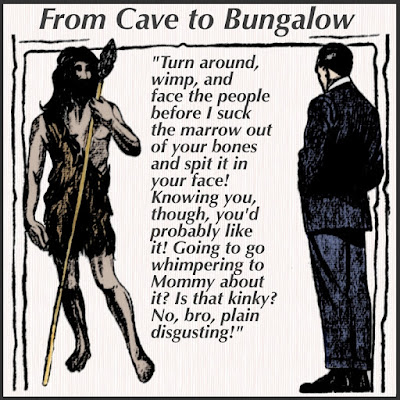 Paranoia
Part 21 of 30
Yesterday had a caveman theme, today too, maybe a few days of it

That’s actually pretty hot, what the caveman’s saying, dressing down modern man, because he can, being a caveman and not one of our modern wimps, which includes me. You tell him, Ug!

But watch me bait Ug: “You wouldn’t say that to my face!” Then he starts to slow-speak it, the intensity of his eyes becoming enormous. Enough fire to consume a vein of coal. “Turn -- around -- wimp -- and…” By this point with his slow-speaking, I’ve gathered up every ounce of precious paranoia I have -- and I’m stoved up with it most of the time -- and I’m burning a hole in his forehead with the hot gaze of my suddenly glowing head.

Suddenly the caveman goes silent and drops to his knees. With my glare cooling off not one single degree. Then I’m taunting him: “Did you have something to say about spitting in my face? Didn’t I hear a hurtful spiel about you whimpering to Mommy?” His spear has fallen to the ground. And I burn my fury home, as only I can do: “You know my Mommy’s dead!” Suddenly he sees the real grudge I have. “You filthy caveman! You will not even THINK of my mother, let alone SPEAK of her! She was better than you'll ever be, in every respect…” He’s clutching his neck as I amp up the watts.

And launch into My Soliloquy:

“This vulgarity you spout from your filthy tongue -- what is that, a never-laundered skin of a bear that died of natural causes? -- about ‘my Mommy,’ I called her Mom, and goddammit, I oughta pull that cursed tongue out of your vile mouth and throw it to the jackals! But one thing I hate worse than any insult against my mother is the thought that jackals are even in the picture!” He’s then begging for one drop of cool water.

“My mother was a tougher woman than you can even dream of. With more fight in her little finger than you have in this whole mess you call a body. O the big tough animal-skin man! If I’d’ve been here the animal would’ve won, and he’d have your naked skin as a coat around his whole fur and thankful for respite against the rain. Although I don’t know, your skin’s pretty thin, and yet you’re the last to know it!” He seeks mercy.

“No, no, no, Ug, there’s no mercy for one as vile as you, not yet! Grovel, you half-baked monkey. You might not know this but I embody my mother! Can you conceive of that? Wherever I go, she goes! And my many brothers and sisters feel the same way. When she died, she didn’t really die, she was transfigured, and each one of us received of her strength. I used to be paranoid about my own shadow. Because I was a 98-pound weakling and I knew the kids were looking for every edge against me: ‘Hey, everybody, look how skinny his shadow is!” But you know where I got strength? Hell, you don’t know yet!? From my mother.” I suddenly feel like kicking him to death, but -- wouldn’t you know it? -- the spirit of my mother descends and my leg is calmed.

As Ug crawls away, I ask my mother why I’m so paranoid, and her answer was --- Aww, who am I fooling? None of this happened, Mom hasn’t been back forever. I slink away, again myself paranoid as crap.
Posted by dbkundalini at 6:00 AM