They'd Peck Your Eyes Out 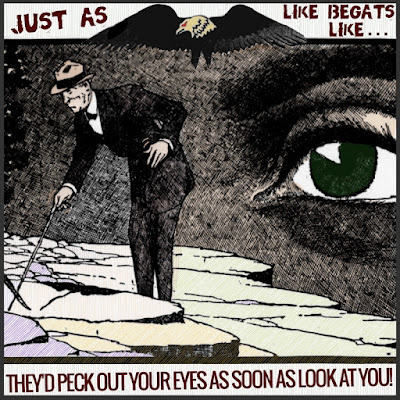 I think this one might be a little sensitive for a few of you. Because you value your sight and the thought that it could suddenly be gone, it’s right up there with the most frightful traumas. As for me, I typically shun anything that seems to be that traumatic. I mean, I’m as paranoid as anyone, but some things are so bad I totally exclude them from my thoughts, really not even allowing a consideration of them as a possibility. Out of sight, up shit creek.

So I don’t know if I can even consider these things. This one's approaching prime nightmare country for me. If I go on -- and boldness seems to be getting the better of me; I guess I live to impress with my boldness -- it could be such a stimulus to karma and you-know-what might happen. I’m not even going to say it! Obliteration.

But it’s happened to others, I don’t know why it couldn’t happen to me. Which I didn’t say, my only surmise hitherto being that it could happen to me, and I want to exclude that as a thing, whether a likely thing or a long shot. But long shots are real. Someone just out of the blue -- and I’m going to be looking at assassins tomorrow -- could pick me off. Fade to black? No! Don’t let it happen...

I may as well say it, I completely know that I’m going to die someday. And someday’s getting closer all the time. I may be feeling pretty well today, and I’m more or less on top of my game, but there'll come a day when I’ll wake up screaming: “My legs, they don’t work!” (I hope it’s not my legs.) Or, “My eyes, they don’t work!” Or, “My entire body (excluding my mouth), it’s gone completely haywire, totally whack, it’s defunct, I need a total being-makeover, I can barely breathe, my lungs are dripping into my legs, my butt’s cracked, there’s toe-jam from the soles of my feet to the nape of my knees. Get a doctor STAT and send for the undertaker, one who’s willing not to charge me if I accidentally live!”

This is a paranoiac’s feast, the full spread, an endless panoply of every terrible dish, and this time we didn’t forget the gravy! My leg as a stew-bone, it could happen! Right down the line from the top of your head to the bottom of your feet, someone could do anything with it. Get enough of us together, worthless bodies, and we could end global hunger. Cannibalism, why waste a crummy body like mine? At this point it’s more than paranoia, it’s acceptance.

You’ve all been trailing me these many years. Even when I was 22 or something, they were saying, “This guy can’t hang on much longer. But look how young and supple he is! We’ll harvest his organs for transplants and end hunger with the rest. Blah blah blah blah, see that my tongue’s already ceased functioning, and my fingers have forgotten the feeling of the keyboard... Asdfghjkkl, send help!

(Doesn’t it look like Asdfghjkkl sounded out would be “As a dignified jackal”? Do jackals even have dignity? I think not.)
Posted by dbkundalini at 6:00 AM