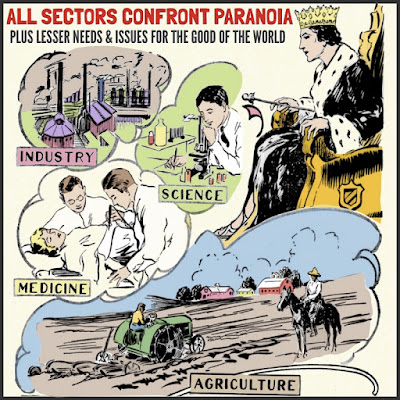 Here’s a truth you should know, definitely worth the price of admission, zero. It’s biggest value is there’s nothing in it that anyone should dispute. But I fear some of you will and so go on your merry way to a well-deserved destruction. Got your attention? The truth is, It’s not love that makes the world go ‘round, it’s paranoia. Which you come to love, since however things are is what we should love. If we don’t love reality -- as bleak and hopeless as it appears -- we’ve lost the way.

I’ve been seriously pondering -- occasionally splashing my drink from nervousness -- whether to unleash the hounds of this knowledge. Because the whole truth is usually kept from us, mercifully, mostly for our own good, and in large part because it’s frowned upon to watch helpless morons colliding into each other, messing up their hopes and existence and reaping folly. Is it the great tragedy that we think of when that happens? Probably at some level, yes, but the basic gist of it is, it doesn't matter; existence always resets and is back on track with us or without us.

Sometimes I walk through the cemetery up the hill and wonder about the lives at my feet. Were they really anything at all, like this guy over here -- sentimental picture of him encased on the stone? I'd guess like all of us. Paranoid cogs in the machine. Then there’s the others, the vast majority, where vandals have smashed their pictures to smithereens, a terrible thing to see. Or is it? Maybe in the vast hereafter, once they've received their wings they've flitted to their eternal reward and it doesn't matter. Or, it could be, they’re saying, “I totally missed the truth, went in for counseling for paranoia when I should’ve seen it as my inspiration. I became a boring simpleton when I could've gone hog-wild and at least had a story to tell.” So they make the sign of the cross from their perch in heaven, a blessing upon anyone who would so graciously -- but without apparent wisdom -- destroy their picture.

All right, paranoia makes the world go ‘round, we all agree. But who’s in charge of seeing to it that it gets done? That’s one of my biggest complaints about co-workers and slipshod supervision; let’s cut the crap and get things done! In these matters, it’s King Paranoia, and whomever the queen for the day is, because King Paranoia totally suspects her of cheating with other anthropomorphic concepts.

King Paranoia sees those with the promise to fill the many important sectors of existence. And before you know it, you -- all us lowly peons -- are in a slot of society: farming, manufacturing, science, holding down the fort, screwing up, and the list goes on. Maybe you’re a list-maker, no one could be more paranoid, being a completist, but always a hopeless failure. I'm giving it my all and usually see when paranoia is about to trap me into spending the whole day on something. The best weapon against paranoia, then, are ellipses, you’re just saying … “Let someone else do the grunt work. There’s a whole sector out there for me to worry and fret over.” King Paranoia sees our good deeds and says, “At last, someone I can use!”
Posted by dbkundalini at 6:00 AM