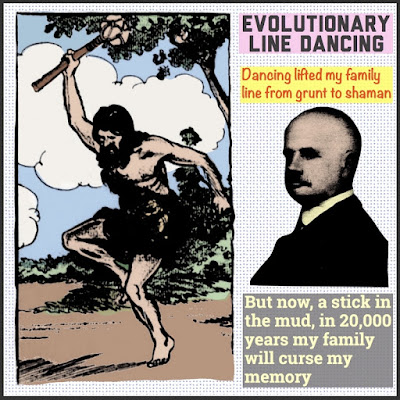 After 20,000 years of steadily climbing out of the muck and mire, I regret to say that these current days -- the years since my birth -- have taken a decidedly downhill course. Is this all my fault? My answer to that important question tends to skew toward “No,” then goes for a quick U-turn and says, “Hell, no!,” before reconsidering the possibilities that indeed it could be partially if not wholly my fault.

Which I hate, and damn the luck, that I out of all the generations -- and I hear the 1700s were particularly great, thanks to men wearing wigs -- we had to pick now, my time, to change course so terribly.

It sounds like I’m admitting a lot, but, please, don’t take it that way. I’m trying more to reconcile the situation, that no one generation is responsible for anything unless it’d be to forego breeding all together. Which would have to be across the board, since obviously the current generation is more than me, myself, and I. I have relatives, some of whom I used to see when I was welcome at family reunions. Then, I don’t know who it was that started the rumor that I supposedly said, “This family be damned!” Whatever it was I said wasn’t really all that bad. Everyone has a bad day.

I really wouldn’t mind going back to the dawn of history and having a talk with Ugg or whatever his name was. And to let him know from my point farther down line we believe he had it easy. He had no one really to satisfy, no one to impress. Which is the way it had to work: He was born from someone, but there was a quick break in the line, be it continental drift or the family scattered after bad crops, and he was on his own. Once separated, they never rejoined. So everything he did then was easier. No judgment. Which all of us could use at times.

The eons sped on. And as the social web squeezed tighter and there were no completely obscure places to go, the rest of us had to do our best within an oppressive social environment, and that can be beaucoup pressure. You go to a family reunion and the guys have their "junk" draped out for a little comparison/bragging ritual that for some of them is a lot of fun. One cousin has it especially good, and they were always kidding him about it: “Hope you spool it up at night so no one trips over it!” He pats himself and with a sly grin says something modest, like, “It’s usually too busy for that, if you know what I mean,” before sneaking off with Cousin Agnes to Lord knows where, I guess sharing recipes.

In terms of honoring and shaming then, some guys get all the breaks! But, hey, take another look. I have a decent head on my shoulders -- who am I kidding? We haven’t had a reunion for 10 years, but I still know they’re talking about me, and laughing. They might have set a world’s record for it by now, this constant terrible laughing, leaving me absolutely no break in my imagination. And I’m frankly sick and tired of it.
Posted by dbkundalini at 6:00 AM