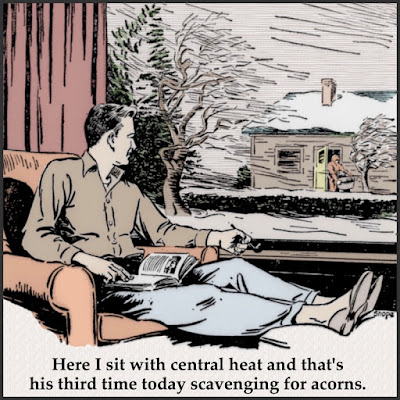 My life of paranoia is one of the worst experiences I’ve ever had. But that’s not to say I’m miserable every moment of every day, because I’m not. I’ve really worked on it to the extent I can, and have been doing the things a doctor so wisely told me, “Try to make the best of things. And remember, there’s lots of other losers worse off than you.” That one took me by surprise, because, really, when it’s just me in my constant thoughts, I have a constant nagging pain. But when I compare myself to others, it helps me to know I'm leading the pack even if it's only narrowly.

So this guy's a pretty good doctor, and the insurance company isn’t paying him because he’s a quack. He obviously can make some halfway decent pronouncements. And if I can’t believe him, who am I going to believe? Some guys at the local bar talking dirt against him? I mean, they might be right, but there’s a big difference between him and them. The insurance company wouldn’t pay squat for the opinion of guys at the bar. And they’re a profit-making company, so you can trust them.

It's really going pretty well. Maybe not everyday’s a good day, but on the good days I'm following his advice to the letter. And for the most part, two thumbs up. The more miserable others are, the better. The other day there was a guy bleeding from the leg. Apparently too dumb to handle an ax. We were trying to call the ambulance -- not so much me but this other dude -- and he and the ambulance driver got in such an argument about the case, thinking that the guy had something to do with it, or was perhaps the innocent victim’s brother. I myself was confused, and he had a towel wrapped around his leg, but maybe it didn’t look as bad as it was. But the ambulance guys, confused, just fingered us all and sped off. It took me to pronounce the guy dead, and I’m not even medically sure when the exact moment of death came. The police came back and called him “A. John Doe.” So, my condolences to the Doe family. It could be that he was a nice guy, but I'm not really his judge.

Anyway, fast forward. I’m always looking for people worse off than me and trying to make the best of it. So imagine the valuable goldmine I inherited when my neighbor’s furnace wasn’t working. Right about the time of the biggest blizzard in the state since the time of Christ. Cold? Like my dad used to say, “Colder than a well-digger’s butt,” and something about a witch’s tit.

So, again, it was very therapeutic to watch my neighbor out foraging for acorns to burn to keep his house heated. My own paranoia receded and it was one of those rare times of comfort that I’d almost forgotten existed. The only problem with the whole scene, I needed to put some caulking around my own picture window. It’s a little drafty. And, dammit, a draft like keeps my furnace running, money down the drain. It's always something, but this is ridiculous. Things were going pretty well, then this. I just can’t catch a break...
Posted by dbkundalini at 6:00 AM