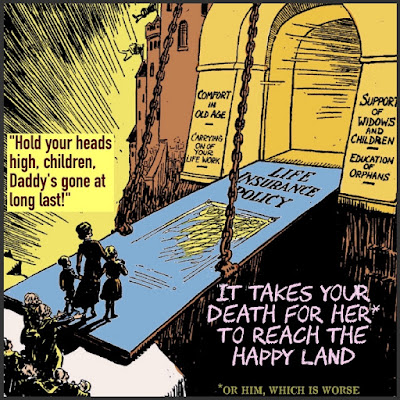 Do you get the distinct feeling these days that there’s a lot more outright glee when people die than there used to be? I’m running over it in my thoughts and that's how it seems. We may not hear a lot of happiness about deaths but I don’t hear much sorrow either. And if the sorrow isn't there, we're left with some degree of happiness. But then again I might not be the best witness on the subject, since I don’t hear much about anything. Essentially in my own little bubble.

Now that I think of it, I was always in a kind of bubble. No one was coming to me with their problems, their joys and sorrows, but I still heard it. The widow would be in seclusion, walking in slow motion around her house dressed in flowing black. If you ever saw her the veil was so dark you thought you were in a horror movie. Just hanging there, about three inches from her face. Flowing forth from a full-headed outer veil holder, probably mostly so the veil wouldn’t bump against her nose and get wet, like if she were crying a lot and her nose running.

It’s the kind of thing I remember we never felt comfortable to stare at. But back then they practically closed up the house, and really got into the full art of grief. And this also went for men although they didn’t wear a veil, just hung around the house poking into the cupboard trying to figure out how to cook food. And they may not have been very hungry, because grief took their appetite away. Those were the good old days when people really took grief to heart and sometimes howled for a month.

I hate to go overboard characterizing grief these days in the full negative way I imagine it. Suffice to say, these days if you’re inclined to do anything at all in the face of death, people think there's something wrong with you. “Eww, you’re morbid. Death is a fact of life, get over it. Grief? We remember your husband, something of a bastard, good riddance to bad rubbish.” I’d hate to have someone say that about me, but in these coarse days -- “La la la, he died!” -- there’s nothing so scurrilous that one of our modern-day shallow grievers wouldn’t say. “C’mon, Maude, let’s strap on the bikinis and hit the beach!” An actual quote by a couple of 20-something widows. Their guys supposedly died of grease fumes at the factory, but I suspected foul play, leading me to surmise the love of sunbathing and swimming overrode the supposed love of their lives! But I haven’t got the proof. It's under lock and key. The police would throw me out on a writ of nolo contendre, a confusing topic for those who don’t know the law.

OK, well it’s no secret that I’ve thought a few times about my own death. It hasn’t happened yet, but when it does… Let me repeat that slowly, When-it-does… Don’t assume the worst in my intentions. Because there’s no there there. Look to my family. Are they grieving apparently too little? Or similarly, are they grieving too much? And we may as well throw in, Are they grieving just right? That might be a BINGO. Because they’ve given a little too much thought to the subject to be completely innocent. I’d round up the usual suspects, which with my well-placed, fully-justified paranoia, includes every stinking one of my survivors and friends. Make sure you give them the third degree before a single cent is distributed!
Posted by dbkundalini at 6:00 AM