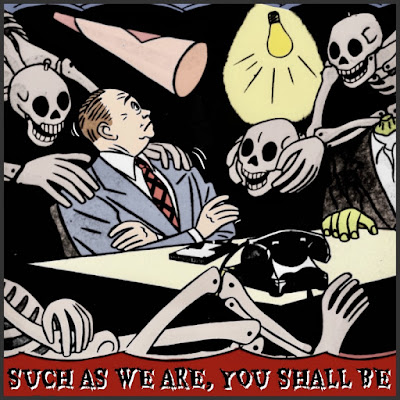 It’s always -- every stinking day -- with the death paranoia! I truly think my mind senses it could be any minute now. But it can’t be now because I’m doing this now. And I don’t just want to drop dead minutes from now, having my neck snapped as in a lynching. That’s an interesting thing, though, the way they dangle the bad news in front of you: “I sentence you to death by hanging from the neck until you are dead,” something like that. You’re like, Thank you for clarifying that, the exact sentence, the technique, and the result...

It would be worse, but certainly just as authoritative, if hideous skeletons who’ve “been there, done that,” came back with their bones and a tormented grin -- insistent as only an enlivened skeleton can be -- cackling the same words and taking glee in your torment. From their point of view, the more the merrier. “As you are morose, so I have been. And as you have been gleeful and morbid at the passing of others, so we shall be for unending centuries to come!”

Half the fun for them is getting there. Not just putting you in your place but keeping you on full display with the most morbid context they can muster: “What you’ve done was terrible, and the penalty will match your deeds, tormenting your mind every moment between now and then. What you have done is so heinous you will never lose the freshness of your punishment!”

Heh, this kind of reminds me of my dreams as a kid, but back then it was more of a heavenly situation I beheld. The great throne-room and a hallway like in The Wizard of Oz, and the bitter realization that there could be no escape. Heaven is known for many things, but one thing it’s known for above all things, and according to every source, if you look hard enough and are diligent in your interpretation: There’s nowhere to run, nowhere to hide, no broom closet in heaven for a sanctuary. Meaning, whoever the heavenly janitors are, they don’t keep their equipment and rags in a typical broom closet. They’re either in the open in the hallway or they're materialized as necessary when a blot on Heaven’s purity demands cleansing.

Look at our hero. There’s two things hovering. A bare light bulb, known of course for the torment it causes when swinging to and fro and stirring up eerie shadows. A skeleton gets its bony fingers close enough, and the thing’s swinging, downright terrifying. And there’s a horn or megaphone, a primitive speaker, perhaps, announcing the verdict, the disappointment, and finally the sentence of your hanging. O! I hope that doesn't loom out there for me! But if it does, my last act in this mortal existence will be peeing my pants and leaving the mess for others.
Posted by dbkundalini at 6:00 AM